In the April/May 2017 issue of Midwest Flyer Magazine, I wrote about the way I do glideslope intercepts, and one of our readers brought an unknown fact to light on why this may not be the best procedure. I also want to share some of my thoughts on circling approaches and make our readers think before attempting one. Additionally, after three years of work, a homebuilt aircraft takes to the air to rival many corporate jets. And a new ADS-B product appeared at Sun ‘n Fun in Lakeland, Fla., that has the greatest potential and at the lowest acquisition cost.

I always enjoy hearing from our readers and I recently received an interesting email from Antonio Rodriguez of Eagan, Minnesota. Antonio is a flight instructor who served in the U.S. Air Force. He shared some of his thoughts of why it may not be the wisest choice to plan on intercepting the glideslope on an Instrument Landing System (ILS) approach a long way out, and following it down as I had suggested. The point that he made was from AIM 1-1-9 d.3. (Glide Slope/Glide Path), which explains that the “glideslope is normally usable at a distance of 10nm. That 10 nm is from the glideslope antenna and is not referenced to the FAF, as I had previously thought.

In the case of hoping to get an accurate glideslope and avoiding a step-down, may not work. Even though the range of a glideslope may compel such a move on behalf of the pilot, it is necessary to note that the FAA only guarantees the accuracy to that limited distance. While on the topic of glide slopes and glide paths, it should be noted that the glide path on a GPS approach designated as an LPV (Localizer Precision with Vertical Guidance), the needle and enunciator will not become active until after crossing the fix prior to the Final Approach Fix (FAF).

I had recently seen an anomaly for the second time in a six-month period where the glideslope/glide path needle did not appear during an ILS approach and on an LPV approach, yet the autopilot coupled and flew the approach perfectly. I am not sure what happened, but I had flown this aircraft with the owner for over 10 years, and this had never occurred before. The only thing the owner could tell me is that the engine monitor was removed and sent to the factory recently, and a wire might have gotten broken in the process. Guess we must test everything imaginable after maintenance, even if unrelated.

I want to dedicate some of my column in this issue to the “circling approach,” as it seems to have been an issue in several recent fatal IFR accidents. On an Instrument Proficiency Check (IPC), the FAA requires the pilot to demonstrate this maneuver. A lot of thought has gone into the design and execution of this maneuver by the FAA. The altitude minimums are specifically calculated for aircraft based on their speed and turning radius and obstructions. Pilots are instructed not to descend below this altitude until reaching a position where a normal landing can be made. This is all calculated by the “terpsters” who are part of the FAA and may work in a perfect world, but let me tell you, it can be a maneuver that is hazardous to survival. After 20 years of pilots urging the FAA to increase safety by making higher circling minimums, beginning with the November 15, 2012 approach charts, circling minimums were increased (see FIG 1 & 2). 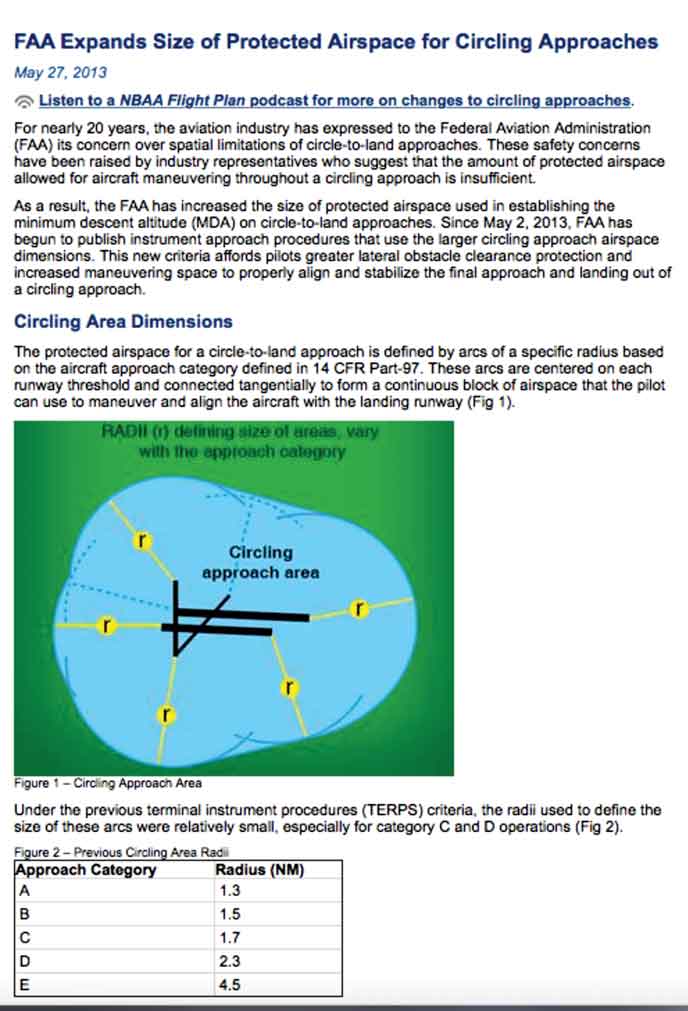 It is my personal recommendation to all instrument pilots to avoid circling approaches altogether. When I do an instrument proficiency check, this is a required maneuver according to the FAA, but I will only do it in good VFR conditions.

A recent incident came to my attention where an FAA inspector failed an applicant on a checkride for refusing to do a circling approach at night and in marginal conditions. Exercising good judgment should not be a reason for failure. Many airlines and charter operators prohibit circling approaches in their flight manuals, and for a good reason. 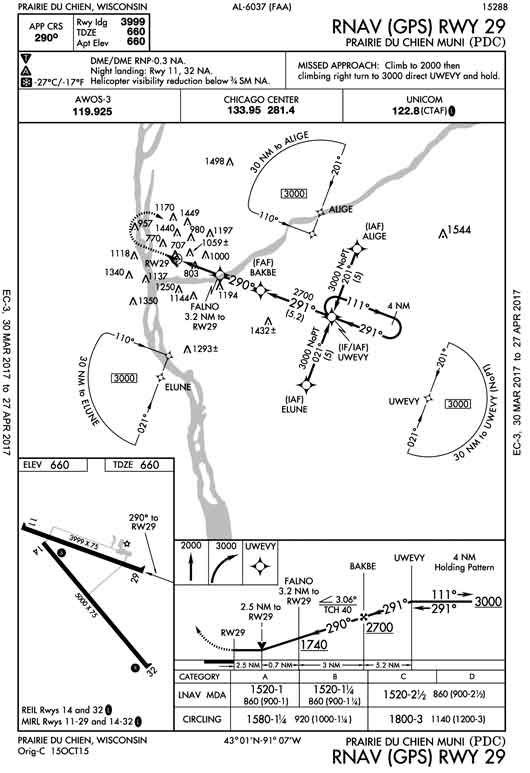 FIG. 3 - For Illustration Only! Chart Not To Be Used For Naviagation

Let’s look at an approach chart for GPS RWY 29 at PDC (FIG 3) and note circling minimums of 1580 feet and the obstacle circled with an elevation of 1449 feet. Doing that approach recently and circling to RWY 14, it is pretty scary to see that tower so close, though I am sure the terpsters checked it for compliance. Also, note the notation of no landing at night RWY 11 or 32.

I will continue this topic in the next issue of Midwest Flyer Magazine, but would like to hear from you on your thoughts on circling approaches, so please email me at captmick@me.com. 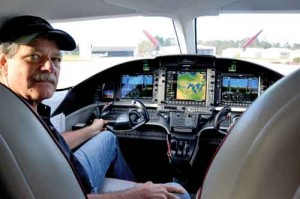 After three years of hard work and a considerable financial outlay, Galen Manternach of Wisconsin Rapids, Wis., completed the construction and flight testing/training of the amateur-built airplane of anyone’s dreams. I am proud to have worked with Galen along the way helping him to transition into his new Epic. After displaying the airplane at Sun ‘n Fun, we flew it back to Wisconsin. 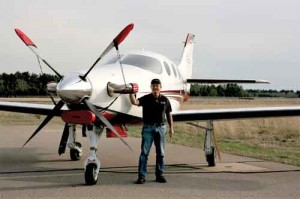 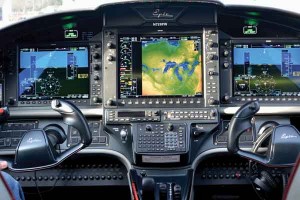 The Epic is not the usual amateur-built aircraft, as it is pressurized and powered by a 1200 shp PT6. The avionics package is a Garmin G950 and is not lacking in capability. When I wrote in the beginning of my column that it rivals many corporate jets, we had a true airspeed of slightly over 330 kts at FL 280 as we loafed along home burning 50 gph. I would really call this my favorite travel airplane and if the lottery numbers are right, I will own one soon (dream on, Mick). Epic will be selling a factory-built aircraft after completing FAA certification this fall.

I have been a skeptic for some time on the ADS-B requirement, not just because of its cost to aircraft owners, but also its poor design and performance. Many pilots refer to it as, “Some of the traffic, some of the time.” But at Sun ‘n Fun this year, April 4 –9, 2017 in Lakeland, Fla., I was impressed with several new products made by Levil Aviation (FIG 4 & 5). 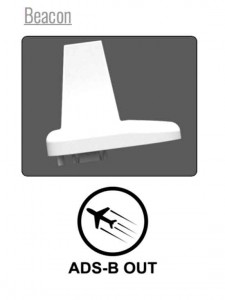 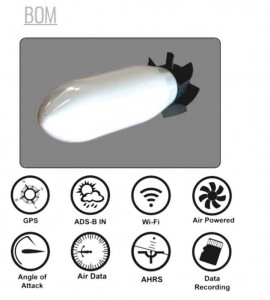 Levil Aviation’s first innovation was the “Beacon,” which is an antenna to be mounted under the belly of an aircraft. The “Beacon” is a self-contained ADS-B out device that is 2020 compliant with all necessary components with a selling price of around $1,000. The second innovation is called the “BOM,” as it looks like a bomb. It mounts under the wing of the aircraft and provides a complete backup data source for your iPad display showing your GPS position, ADS-B in, angle of attack, air data and AHRS, and it is self-powered with its own battery and a small wind turbine propeller for charging. The BOM has a WiFi outsource to communicate with your iPad. The price of this unit is slightly more than a thousand dollars. Being an avionics geek and not easily impressed, I would have to say this got my attention, and if these devices work as advertised, I may buy one.

The information contained in this column is the expressed opinion of the author only, and readers are advised to seek the advice of their personal flight instructor and others, and refer to the Federal Aviation Regulations, FAA Aeronautical Information Manual and other instructional materials before attempting any procedures discussed herein.