Keeping The “O’Malley” In The Jet Room 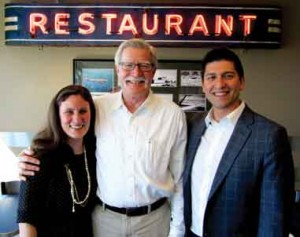 MADISON, WIS. – For the past two decades, the general aviation terminal restaurant at Wisconsin Aviation on Dane County Regional Airport, Madison, Wisconsin (KMSN), has been owned and managed by Pat O’Malley and his wife, Pam. Pat is a private/instrument-rated pilot and aircraft owner, and is known locally, and throughout the Midwest and nationally among transient pilots.

For years, the O’Malleys worked seven days a week, opening at 6:00 a.m. and closing at 2:00 p.m., Monday thru Saturday, and 8:00 a.m. to 2:00 p.m. on Sunday, but life is changing for them since they sold the business in February 2017. The Jet Room specializes in serving breakfast and lunch, and provides catering for corporate and charter flights.

In July 1976, Pat O’Malley opened “The O’Malley Farm Café” in nearby Waunakee, Wisconsin – a rural community where Pat grew up on a farm. After 20 years of serving Waunakee and surrounding communities, Pat sold the cafe in 1996 to pursue a career in real estate. Although he had what it takes to be successful in real estate – a personable guy with business savvy – his heart and expertise was in the restaurant business. So, after only a year, he and Pam opened “Pat O’Malley’s Jet Room” in the old terminal building at Wisconsin Aviation in 1997. Five years later in 2002, the old stone building was torn down to make room for the new Wisconsin Aviation general aviation terminal, which features the modern restaurant you see today with large picture windows overlooking a very active general aviation ramp.

Twenty years at the old café in Waunakee, and now 20 years at the Jet Room in Madison. When local entrepreneurs, Nic and Megan Tarczynski, 39, expressed interest in purchasing the restaurant, the O’Malleys realized that it was time to retire.

The Tarczynskis grew up in the Madison area and are 1999 University of Wisconsin graduates. Even before they were approached by a real estate broker to buy the Jet Room, they were frequent customers.

“I have always had this curiosity about aviation, and now I have the opportunity to experience it firsthand,” said Nic, who aspires to one day learn to fly and own an airplane.

“I want more people to feel this same emotional connection to aviation as I do, and make Pat O’Malley’s Jet Room restaurant their breakfast and lunch destination.”

O’Malley has agreed to stay on for the first six months to help with the transition, and thereafter as a consultant, but he is already gearing up to do a whole lot more flying in the years ahead.

“My job now is to do everything I can to ensure that Nic and Megan succeed,” said O’Malley. “In fact, I want to help them take the business to the next level.” Nic is already looking around the country to establish other general aviation restaurants, and he sees tremendous potential in metropolitan areas the size of Madison and larger.

“Airports are exciting places to be around,” said Nic. “They are naturally exciting, and an airport restaurant has built-in entertainment that other restaurants don’t have.” And like most general aviation terminals with corporate traffic, the Jet Room gets its share of celebrities coming through, which adds to the excitement.

“The Jet Room could not survive totally on pilots as its customer base, but it is the pilots and aircraft activity at the airport that attracts the general public to the restaurant,” said O’Malley. With between 700 and 1,000 people moving to Madison each month, they expect business to grow even more over time.

To learn more about Pat O’Malley’s Jet Room restaurant, and to check out the menu, go to www.jetroomrestaurant.com.

Group reservations and catering is available with advance notice by calling 608-268-5010.