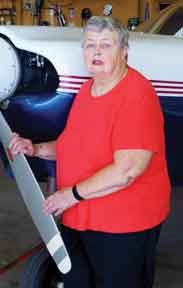 In October 2016, on behalf of the airport and City of Oconto, Duffeck accepted a donation of 140 acres of land to the west of the airport for the future construction of a crosswind runway. Her final project, which she was instrumental in obtaining funding and approval for, will be the reconstruction of Runway 11/29, which is currently underway. Airport tenants and transient pilots have appreciated Duffeck’s knowledge and camaraderie as a pilot, and her expertise and devotion to her career as an airport manager.

Receiving WAMA’s “Distinguished Service Award” was Barry Cooper, Administrator of the FAA Great Lakes Region, who was instrumental in getting the attention of national leaders in filling the radar gap in north central Wisconsin.

Though a solution is still being sought, Cooper’s support is indicative of his support for the Wisconsin aviation community, airport managers, aviation associations, pilots and the Wisconsin Bureau of Aeronautics.

Lt. Col. Christopher Hansen of the Wisconsin Air National Guard at Volk Field, Camp Douglas, Wis., was named “Person of the Year” for overseeing the airspace modernization effort pursued by the Air National Guard in close collaboration with the Federal Aviation Administration. The changes made added significant flexibility for military training while improving the safety and accessibility to the airspace by other users. The process took 8 years to finally get charted and is a testament to the collaborative efforts by the local flying community supported by WAMA, the FAA and the Wisconsin Air National Guard. Hansen is currently the Director of Operations for the Volk Field Combat Readiness Training Center in Camp Douglas, Wisconsin. He holds a Bachelor of Science Degree in Mechanical Engineering from Southern Illinois University, a Master of Science Degree in Business, and flew four deployments in the Middle East in the F16 Falcon.

John Schoenknecht of “The Freeman” newspaper in Waukesha, Wis., received the “Blue Light Award” for excellence in journalism. After retiring in 2007, Schoenknecht began writing a popular history column for the newspaper, which highlighted aviation in Waukesha County in a 10-part series. Schoenknecht attended the University of Wisconsin in Oshkosh, and earned his Master’s Degree from Carroll University in 1992.

The 63rd Annual Wisconsin Aviation Conference will be held May 7-9, 2018 in Wisconsin Dells, Wis. For information, email director@wiama.org.