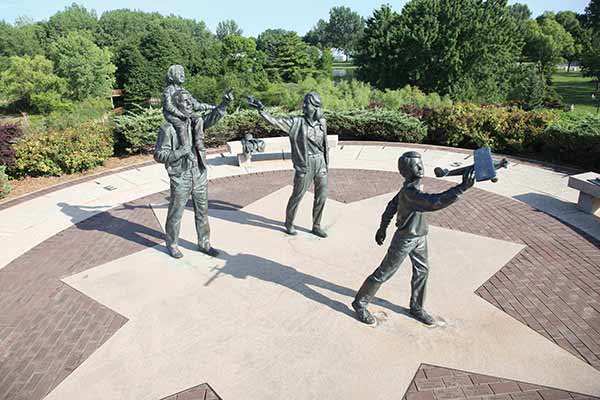 TACOMA, WASH. – Nationally renowned sculptor and painter, Larry Wayne Anderson, 78, of Tacoma, Washington, died October 18, 2018 at his home in Bonney Lake after a long illness. Anderson was best known in aviation circles for his statues “Directions” on Compass Hill at the Experimental Aircraft Association (EAA) Aviation Museum in Oshkosh, Wisconsin (1995).

Born in Tacoma on September 30, 1940, Anderson was a pole vaulter in high school, and attended Lewis and Clark College in Portland, Oregon on an athletic scholarship. After two years at Lewis and Clark, he transferred to Central Washington University in Ellensburg, receiving a bachelor’s degree in education in 1962. He pursued graduate study in art at the Academy of Fine Art in Vienna, Austria in 1965, and at the University of Washington in Seattle in 1966. He completed a Master of Fine Arts in painting at the Cranbrook Art Academy in Bloomfield Hills, Michigan in 1968.

Anderson was an art teacher in Tacoma at Foss High School before launching his career as a sculptor. His first major work was “The Leaf” (1975). This was followed by “Trilogy” (1978). Both sculptures were commissioned by the City of Tacoma and are situated in Wright Park. Many other public sculptures are located in Tacoma. They include “Clearing the Way” in Fireman’s Park, “New Beginnings” in front of Union Station, and “Coming Home” at South 56th and South Tacoma Way, all in 1984, Tacoma’s centennial year. Others in Tacoma include “The Second Touch,” a fountain figure at MultiCare Medical Center (1981), “A Fish Story” in front of Slovonian Hall in Old Town (2002), and “We Honor a Hero” on North I Street at Lowell Elementary (2003).

Major works in the U.S. include “Springfield’s Lincoln,” an ensemble of statues of Abe and Mary Lincoln and two of their boys in Springfield, Illinois (2004); and “Continuum,” with seven distinct life-size sculptures of people and animals, at Purdue University School of Veterinary Medicine in West Lafayette, Indiana (2000).

Anderson’s many bronze sculptures, over 70 in all, comprise a huge legacy of full-size figures and portrait busts. His paintings and drawings are also voluminous and include both realistic and abstract expressionist works.

Anderson not only leaves an inspiring legacy of fine art, but his high-school sweetheart and beloved wife of 56 years, Sharilyn Lea (Hoard) Anderson, two daughters, one son and three grandchildren. The family traveled extensively, and lived abroad in both Austria and France.