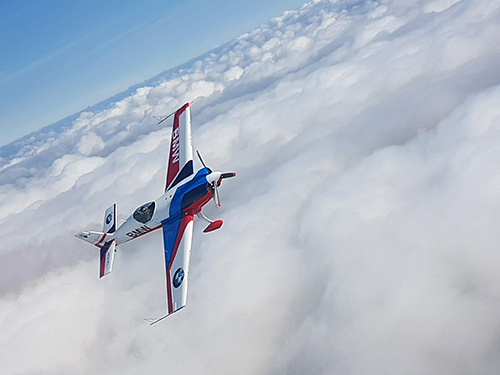 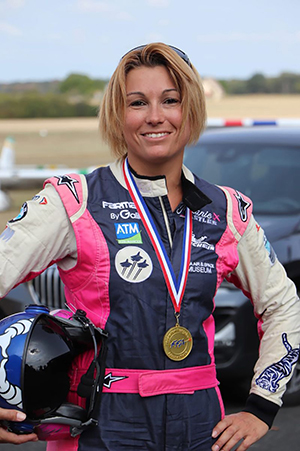 Michelin-sponsored, Mélanie Astles, has won the 2020 title of France Unlimited Female Aerobatic Champion, at an aerobatic contest that took place in Châteauroux, France. She flys an Extra 330 F-HMEL monoplane.

“Since the post-lockdown in May, and in preparation for competitions, I attended several training camps with other pilots in various locations in France with our coach Pierre Varloteaux. A lot of work, a lot of progress, a good atmosphere, willpower and mental preparation,” said Astles. “My next goal – the French Open and the 2021 World International Aerobatic Championships.”

As the only woman competing against men in the German Open/Extra Unlimited Aerobatic Competition that took place in Welzow, August 26-30, Astles took first place overall.

Mélanie Astles was a pilot in the Red Bull Air Race (RBAR) World Championship series before it was canceled following the 2019 season due to a lack of support from venues and patrons.

When she was 6 years old, Astles realized she belong in the sky when her parents took her to an airshow in England. She remembers climbing into the cockpit of a Harrier jet. From that moment, she knew she belonged in the sky, but growing up in a middle-class family (her father a house painter, and her mother, a secretary), the pathway was not clear.

“My parents never encouraged me to do this,” said Astles. “I was told that it was impossible, because we didn’t have the money, and I did not have a scientific background. And when you’re young, you’re told stuff, and you believe it.” Gender, she says, was also a factor. “With no role models, you think these things are impossible. The adults, as well, were thinking that maybe it was not for a girl.”

It wasn’t until Astles was 21 when she started taking flying lessons. She became the aerobatic champion of France 14 years later and finished several times among the world’s top 10 aerobatic pilots, ascending to a European Aerobatic Championship ranking.

But like most aerobatic competition pilots and airshow performers, Mélanie Astles first flew for the airlines to support her hobby: “I used to be an airline pilot for Air France but decided to quit to live my full-time passion and fly aerobatics. So, to answer your question, my full-time job is flying as an aerobatic pilot.” Fortunately, corporate sponsorships like the one from Michelin, helped pay the bills. Flying for the Red Bull Air Race (RBAR) World Championship also helped, but that series was canceled at the end of the 2019 season due to a lack of support from venues and patrons.

Now, Astles gets emails and letters from young girls and boys thanking her for motivating them to pursue their passions. “I don’t think about it directly, but I’m now realizing that I’m inspiring girls,” she says. “When they see me, they realize it is possible to live their dream. It’s not just about being a girl in a man’s sport, but also about becoming a pilot when you don’t have money and you start from zero.”