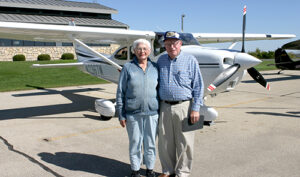 Named after the Wright Brothers, the Wright Brothers Master Pilot Award is the most prestigious award the FAA issues to certified pilots, who have exhibited professionalism, skill, and aviation expertise for at least 50 years while piloting aircraft as “Master Pilots.” Once the award has been issued, the recipient’s name, city and state is added to a published “Roll of Honor” located at https://www.faasafety.gov/content/MasterPilot/RecipientList.aspx.

Phil Peterson and his son, Mark, own a 1998 Cessna 182S Skylane, which they base at Peterson Field in Oregon, Wisconsin, and Monroe Municipal Airport. Phil Peterson has flown throughout the United States, Canada, Bahamas, Central America, and Australia. He holds a Commercial Pilot Certificate and Instrument Rating and has flown over 5,000 hours.

To be eligible for the Wright Brothers Master Pilot Award, a pilot must be a U.S. citizen, hold a U.S. Civil Aviation Authority (CAA) or Federal Aviation Administration (FAA) pilot certificate, and have 50 or more years of civil and military flying experience, of which 20 years may be U.S. military experience. The effective start date for the 50 years is the date the nominee first soloed or its military equivalent. Revocation of any airman certificate disqualifies a nominee for this award.

Pilots or their families must apply for the award themselves by following the application procedures located in the current Wright Brothers Master Pilot Award Information Guide (PDF): https://fsims.faa.gov/PICDetail.aspx?docId=FAA%20FS%20I-8700-2%20Rev%204. Contact your local FSDO for additional information.