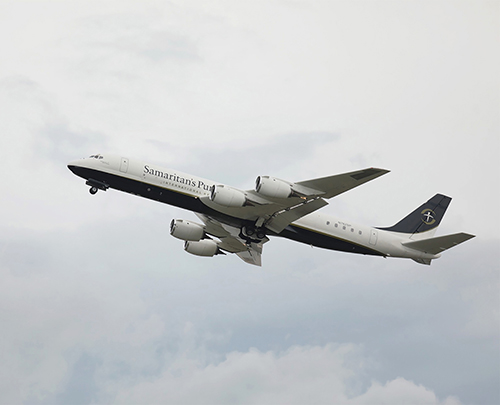 OSHKOSH, WIS. – The Samaritan’s Purse Douglas DC-8, which has flown medical personnel and other relief workers, as well as tons of food, medicine, and supplies to aid victims of natural disasters, war, famine, and other emergencies around the globe, will be featured at the world’s largest fly-in convention in 2021 as part of EAA AirVenture Oshkosh.

The DC-8 will be part of a salute to humanitarian aviation at the 68th edition of the Experimental Aircraft Association’s annual fly-in convention, July 26 – August 1, at Wittman Regional Airport in Oshkosh.

“Aviation is regularly used as the first response to areas around the world that have been hard hit by natural disasters or other calamities, and we are featuring some of those humanitarian outreach efforts this year at Oshkosh,” said Rick Larsen, EAA’s vice president of communities and member programming, who coordinates AirVenture features and attractions. “The teams who operate and supply the Samaritan’s Purse DC-8 have a unique story to tell of their efforts to bring relief to dozens of stricken areas over the past five years. We welcome them to Oshkosh as we highlight the good aviation provides around the world.”

In 2020, Samaritan’s Purse was among the first aid organizations to respond to the COVID-19 pandemic, as it delivered 38 tons of medical relief supplies, including an Emergency Field Hospital, to Italy during the most-dire days of the pandemic in that country. Missions last year also included trips to aid families in Armenia who fled conflict, hurricane victims in Honduras, and families in Lebanon impacted by a deadly explosion.

The DC-8 was first deployed in 2016 and is configured to carry up to 84,000 pounds of cargo and 32 passengers. It significantly increased the organization’s capacity to respond immediately to crises around the world as part of the 23-aircraft fleet (including two helicopters) in the Samaritan’s Purse aviation division.

“When disasters strike anywhere in the world, getting relief supplies and disaster response specialists to the site as soon as possible is absolutely essential,” said Franklin Graham, pilot and president of Samaritan’s Purse. “The DC-8 allows us to respond at a moment’s notice and bring life-saving relief in Jesus’ Name. We want to share how aviation is critical in the aftermath of a disaster, and there is no better place to do that than at Oshkosh.”

The Samaritan’s Purse DC-8 is scheduled to be at AirVenture from Monday to Wednesday, July 26-28.

EAA AirVenture Oshkosh is “The World’s Greatest Aviation Celebration” and EAA’s yearly membership convention. Additional EAA AirVenture information, including advance ticket and camping purchase, is available online at www.eaa.org/airventure. EAA members receive the lowest prices on admission rates. Free youth admission for ages 18 and under is supported in part by The Boeing Company. For more information on EAA and its programs, call 800-JOIN-EAA (800-564-6322) or visit www.eaa.org. Immediate news is available at www.twitter.com/EAA.