A Look At The Kansas Aviation Museum

If it wasn’t for Wichita, Kansas, there would be quite a few blanks missing from the aviation history books. The “Air Capital of the World,” as it became to be known as in 1928, wasn’t just home to the notables of Learjet, Cessna, and Beechcraft, but also other big names like Stearman, Travel Air, and Swallow.

All in all, in its “heyday” prior to the Great Depression, the town had nearly three dozen active aircraft manufacturers at one time. Names included those already mentioned, as well as a few others. Perhaps the most poignant example of the sheer scale of the then booming industry is the map of the town posted near the entrance of the museum. This shows the locations of each of these early manufacturers, as well as other information pertinent to them (pictured here).

Much of the history of these littler, lesser-known manufacturers is not as widely publicized as legacy manufacturers that still have operations. That said, their importance to the aviation ecosystem of Wichita, the state, and ultimately the world should not be understated.

The Kansas Aviation Museum (KAM) has, since 1991, worked to showcase all these companies unique histories, as well as the people who made these airplanes possible. Guided by the vision of inspiring, educating, and commemorating Kansas aviation for the future, the diverse collection of aerial artifacts and aircraft is as unique as the story of the region’s involvement in aviation.

Like other museums, there are a variety of exhibits and avenues to aid in the absorption of history. Visitors can expect to spend several hours working their way through the three-story former terminal building that houses all interior exhibits, as well as the ramp area, which is adjacent to McConnell Air Force Base. General aviation traffic unfortunately is not allowed.

Barb Kramer, Kansas Aviation Museum’s Interim Executive Director, notes the following about some of the most highly regarded interior exhibits:

“I make a point to ask our guests, new and returning, what are their favorite museum features, and the most popular answers are: the control tower, the flight simulators (donated by the Beach Family Foundation), the Vintage Aircraft Room, and the building itself. A lot of people remark about the art deco feel of the museum and express an appreciation for the building that is on the National Register of Historical Places. For me personally, while I love the whole museum, it is a tie between the Vintage Aircraft Room, Berry Foundation Learning Library, and Air Capital Theater.”

Ms. Kramer continues by giving a brief overview of these spaces, with others described on the Kansas Aviation Museum’s website:

“The Berry Foundation Research Library is a space for people who are interested in doing aviation research. It includes two comfortable chairs and is surrounded by shelves full of magazines, books, and other print materials. Our director of collections, Logan Daugherty, is available during the week to help guests with any research-related questions and can also assist them with searching our extensive archive space, which consists of 216,580 items (as of late August 2021).

“Another new and cool space is the Air Capital Theater funded by Bank of America. Currently, the 40-minute film, ‘Wichita: The Air Capital’ is being shown on loop. It is an excellent piece that explains exactly why Wichita gained the name it did. The Vintage Aircraft Exhibit is the showcase for the exceptional skills our volunteers have in restoring aircraft and it is second to none. We have two new aircraft in this exhibit, a Cessna C-37 Airmaster, which was once owned by Blanche Noyes (on loan from the Ninety-Nines); and a Travel Air 4000, not only once owned by Louse Thaden, but it was the plane she won the 1929 Women’s Air Derby in! Both planes are a feather in KAM’s cap and tie wonderfully well into our upcoming new exhibit, the Women of Aviation Exhibit, which is funded by Fidelity Bank and Energy.” 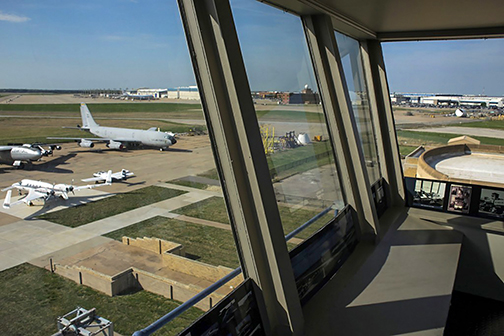 The view from the decommissioned air traffic control tower.

Perhaps, most impressive is that few of the dozen or so displayed aircraft that dot the original terrazzo floor of the former Wichita Municipal Airport terminal (1935-1954) did not arrive in their current meticulous condition. Many of the aircraft on display initially arrived in horrible condition. Some were found in collapsed barns or in crashes. In the case of the Texaco Stearman 4D, it showed up in dozens of five-gallon buckets. The skills to return these aircraft back to their beauty and glory is world-class and the museum is proud to showcase their volunteers’ many talents.

Prior to being proudly displayed for aviation enthusiasts of all ages to view, all aircraft have first been routed to the restoration shop just outside the building’s front doors. Here, spread out amongst several thousand square feet of shop space, more than 100 weekly volunteers work to cut, twist, sand, and shape wood, metal, and other materials to restore the aircraft back to their former glory.

Much of these craftsmen are retired from the town’s manufacturers and rely upon their decades of experience to accurately accomplish cosmetic restorations to original design specifications. Walking through the sawdust and fabric dope-scent filled rooms, visitors (by pre-arranged invitation) can see several in-progress restorations, each in varying stages of completion. Current restoration projects include a Cessna 310, a Beechcraft C-45 painted in the WASP (Women Airforce Service Pilots) livery, as well as a BD-5 experimental aircraft.

Aircraft donated to the museum and the volunteers’ work outpaces the amount of covered space available to showcase the artifacts to the public. As such, the ramp area immediately to the Southeast of the building is relied upon heavily. At present, it is home to heavy metal models, like a veteran Boeing B-52D, FedEx liveried Boeing 727, and a retired Kansas Air National Guard Boeing KC-135E, as well as a Ryan International Airlines Boeing 737-200. Other prominent ramp birds include a Beechcraft U-8 Queen Air, Lockheed T-33 “T-Bird,” Republic F-84F, Cessna T-37B “Tweet,” and Boeing B-47E bomber, all of which have some connection to Kansas in one way or another.

General aviation is also represented in this showcase space, headlined by one of the few remaining Beechcraft Starships in any condition. This aircraft serves as a reminder of engineering ingenuity and the design evolution of aircraft in aviation’s relatively short lifespan since first flight. Two early production business jets, a Cessna 500 Citation (serial #1) and a Learjet Model 23 (serial #6) also sit on the ramp. They collectively serve as a testament to a portion of the aerospace sector that was born in Wichita and has become an integral part of the industry.

All these aircraft can be seen from a bird’s eye view within the decommissioned air traffic control tower. Sitting atop the museum itself at approximately 35 feet AGL, visitors are treated to panoramic views of McConnell Air Force Base (KIAB), including military traffic and the neighboring Spirit AeroSystems facility, as well as a considerable portion of Wichita itself.

More information about the Kansas Aviation Museum, including hours of operation, can be found at https://kansasaviationmuseum.org