Even though biking has, traditionally, been one of the most unsafe activities I’ve engaged in, I still love it and practice it often. I do enjoy a good route on a bike, especially to spend a day out and about. However, I try to look for bike lanes or trails (and avoid public roads) as much as possible. San Antonio, Texas is a great city for just that: a day trip to get some exercise, soak in a little history, and/or have some good food. 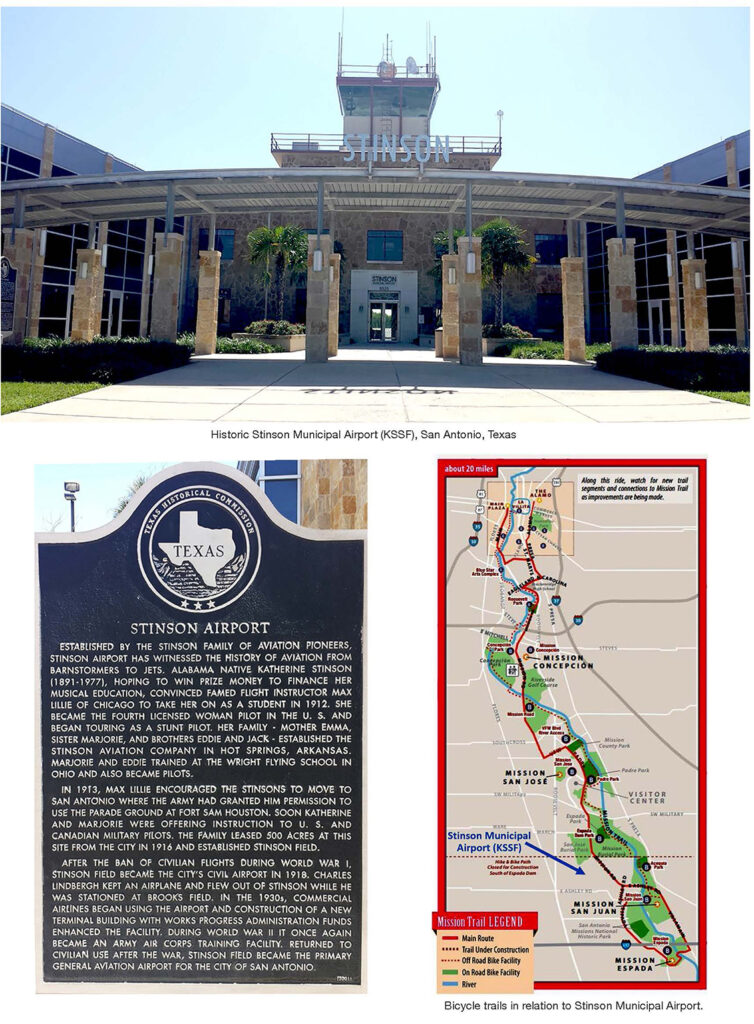 You can three-wheel (fly your airplane) your two-wheel (with your bicycle) into town via the cute and historic Stinson Municipal Airport (KSSF). The airport is proud to be the second oldest General Aviation airport (after College Park) in continuous operation in the country. In 2015, Stinson celebrated its 100-year anniversary.

While Google Maps’ biking option is certainly a good tool to use to get around, the city of San Antonio has developed some helpful biking trail maps.

From Stinson, one should start with the Mission Trail Out & Back one. The 20-mile trail (from end to end) encompasses four Spanish colonial missions built along the San Antonio River to house Spanish missionaries and local Coahuiltecan Indians beginning in the 1720s. This trail is almost entirely on bicycle paths.

Two of the four missions are south of Stinson and the other two are north of the airport. Each mission is about 2.5 miles from the next and, along with the Alamo, these missions have collectively been designated the first UNESCO World Heritage Site in Texas.

Depending on how much time you have, how many miles you want to ride, and/or what other activities you want to indulge in (such as walking the riverwalk, golfing, picnic, kayaking, or eating at a restaurant), one can design different routes.

The Mission Trail, to the north, joins in with downtown San Antonio and four other established bike routes (though not entirely on bike lanes or paths):
1. The Alamo HemisFair Loop is 1.7 miles long and highlights the city’s best-known landmarks.
2. The Brackenridge Park Loop is 6.9 miles and connects the Main Plaza with the vast Brackenridge Golf Course and Park. The San Antonio Zoo and the Japanese Tea Garden are also in that direction.
3. The Pearl Brewery Out & Back Trail is 3.2 miles. The Pearl Brewery complex is a mixed-use development offering restaurants and shopping along with commercial and residential spaces. The Culinary Institute of America has its home there.
4. The King William Loop is 3.6 miles. A leisurely roll through the King William Historic District will make you feel like you’re traveling back through time. The mansions were built for German business and civic leaders by the city’s most prominent architects in the late 1800s and feature a variety of architectural styles.

For more information and maps, visit https://www.sanantonio.gov/Portals/0/Files/SABikes/BikeRoutes/SABikeRides_WEB.pdf. If you cannot bring your bicycle in your airplane (due to lack of space or weight and balance, for example), there’s nothing to worry about. KSSF has a convenient bicycle rental station at 8535 Mission Road, immediately in front of the FBO. If, for whatever reason that station is out of bicycles, there are two others (Acequia Park and Mission San Juan) within a mile. All three stations have both classic bikes and electric bikes for those longer rides.

There are many great restaurants along all of the trails mentioned, but especially downtown, along the riverwalk, and in the Pearl Brewery complex. However, keep in mind Stinson has a restaurant at the old terminal, too. It’s called Gate One.
Fly and bike, safe and often!

ABOUT THE AUTHOR: Yasmina Platt’s full-time job has her planning the future of aviation infrastructure for Joby’s electric Vertical Takeoff and Landing (VTOL) aircraft. She also writes an aviation travel blog called “Air Trails” (www.airtrails.weebly.com), in addition to articles on pilot destinations for Midwest Flyer Magazine. Pilots can locate articles Yasmina has written by going to www.MidwestFlyer.com and typing “Yasmina” in the search box, or by going to the “Archives” section, then “Columns,” then “Destinations.”