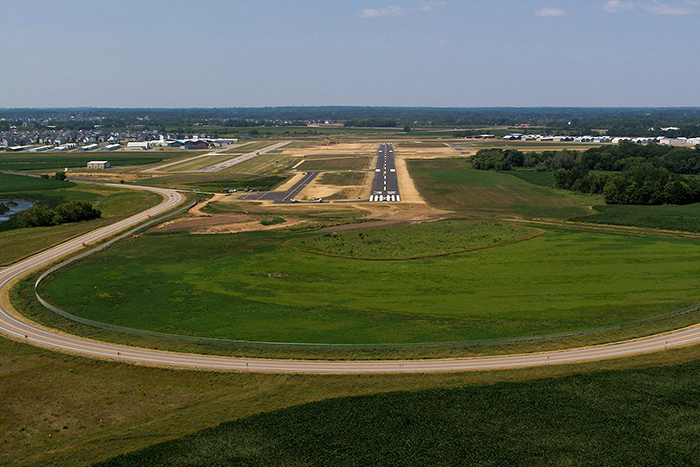 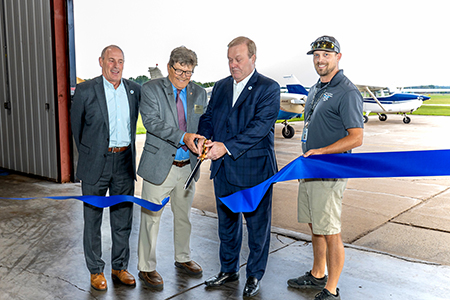 Minneapolis-St. Paul, Minn. – The Metropolitan Airports Commission (MAC) is celebrating the opening of a new 3,500-foot runway at Lake Elmo Airport (21D), one of the latest projects that supports growth in the region’s aviation industry. The new runway is part of a multi-year project to improve airfield infrastructure and provide safer operations.

The new runway opened to air traffic on July 20. Runway 14-32 is 650 feet longer than the previous runway, which will be converted to a taxiway in the final phase of the project. The MAC joined many neighbors, tenants, and users of the airport in a ribbon-cutting ceremony for the new runway on August 17.

“This project was driven by our legislative mission to promote aviation to its fullest potential at all of our airports while minimizing environmental impacts,” said Brian Ryks, CEO of the MAC. “This new runway will be safer, more efficient and support the investments that businesses and tenants are also making at Lake Elmo Airport.”

The MAC’s six general aviation airports are referred to as “reliever airports” within the Twin Cities metropolitan area because they relieve traffic that would otherwise impact Minneapolis-St. Paul International Airport (MSP), the 17th busiest passenger airport in North America. The MAC’s reliever airport system generates an estimated $756 million a year for the area economy and supports more than 4,600 jobs. Despite the pandemic, MAC reliever airports have seen double digit growth in the number of flights between 2019 and 2021, with operations surpassing 352,000 last year across the system.

Located between St. Paul and the St. Croix River, the Lake Elmo Airport is a hub for recreational aircraft, business aviation, and flight training. The airport supports more than 32,000 landings and takeoffs annually.

“Our reliever airports play an important role in the Twin Cities region, especially as we saw a resurgence in private business travel, recreational flying and flight training during the pandemic,” said Rick King, Chair of the MAC. “These infrastructure investments will help us better meet the needs of our strong and growing aviation community.”

Envisioned as a part of the Lake Elmo Airport’s 2016 long-term plan, construction on the modernization project began in 2019. The project also includes realigning an adjacent roadway, upgrading instrument approach technology, installing new lights and signage, and making other airfield safety improvements. The $23.9 million project was funded with more than $17.5 million in federal and state grants.

In the past five years, the MAC has invested more than $50 million to provide a safe, efficient and modern reliever airport system. This includes preserving and enhancing runways, taxiways and taxilanes; adding energy-efficient lighting systems; improving navigation aids, facilities, equipment and fueling, and conducting essential long-term planning and environmental work. The MAC completed a $7 million project at Crystal Airport in 2020 for a major runway extension and airfield improvements. Future investments for airfield modifications and safety improvements have been recommended for Airlake Airport in Lakeville, based on a long-term plan approved by the MAC in April 2018.

About The Metropolitan Airports Commission (MAC)

The Metropolitan Airports Commission (MAC) owns and operates one of the nation’s largest airport systems, including Minneapolis-St Paul International (MSP) and six general aviation airports. The MAC’s airports connect the region to the world and showcase Minnesota’s extraordinary culture to millions of passengers from around the globe who arrive or depart through MAC airports each year. Though a public corporation of the state of Minnesota, the organization is not funded by income or property taxes. Instead, the MAC’s operations are funded by rents and fees generated by users of its airports. For more information, visit www.metroairports.org.