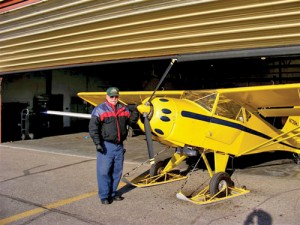 Larry Olson of Albert Lea, Minnesota with a Kitfox on skis.

Larry made his first solo flight in 1950 – 61 years ago – and received his Private Pilot Certificate in 1959 – 52 years ago.  Larry has owned a number of airplanes over the years: a Cub, Champ, Tri-Champ, Citabria, and a Cessna 182, but just as important, Larry has become a fixture around the Albert Lea airport. Larry Olson is one of those people who seems to always be around…taking people for a ride, offering advice, or using his mechanical and engineering skills to assist in the repair of an aircraft part.

Larry has been a member of local flying clubs, and for the past 25 years, has been involved with ultralight and light sport aircraft (LSA). He owns two LSAs – a  Skyraider and a Challenger. As the senior and most experienced LSA pilot in the area, Larry counsels and mentors LSA pilots on airframe and engine issues, as well as LSA safety tips.

Larry Olson has served on the Albert Lea Airport Advisory commission, assisted with the EAA Young Eagles program, and worked at flight breakfasts. He has been an EAA member since the “Rockford” (Illinois) days. His EAA number is 48000.

As the most experienced LSA pilot in the area, Larry serves as a mentor to many pilots new to flying, building, or maintaining LSAs, whether just starting out, or moving from a Private Pilot Certificate to the Sport Pilot Certificate.

There are important differences between LSA aircraft and certified or homebuilt aircraft – wind limitations, angle of climb and descent, glide capability, and turbulence capability, to name a few. Larry, with his knowledge of both conventional general aviation aircraft and LSAs, provides an important “bridge” in counseling pilots.

Larry uses his more than 50 years of experience in the tool-making trade to build and maintain his aircraft (he has built five aircraft) and to help others do the same. He brings a toolmaker’s precision to flying. “Safety’s very important in flying,” Olson said. “You have to be precise in everything you do.”

Larry is one of those people that can simply look at an object, and then not only duplicate it, but make it better!

An example: Larry obtained a set of plans for homebuilt wheel-penetration skis, but they would have been too large for his Skyraider LSA. He scaled them to the correct size and manufactured a set. He conducted a methodical flight test program for the skis, making small adjustments along the way. True to form, the skis work perfectly. Larry engineered another set (with different dimensions) for my Kitfox.

I’ve known Larry Olson for 48 years, ever since I started flying myself.  I’m second in “seniority” as far as “old-timers” at the Albert Lea Airport, and I’ll be very content to remain the pilot with the second most consecutive years at Albert Lea for many years to come.

The Wright Brothers Master Pilot Award recognizes achievements and dedication to aviation safety of those who have flown safely and continuously for 50 years, and the fact that those years must be CONSECUTIVE means that the individual has a demonstrated commitment to aviation itself. We need to recognize these individuals for that commitment. I’m glad Larry is receiving HIS recognition!

To be eligible for the Wright Brothers Award, candidates must:

• Have completed either a flight review or equivalent within the 24 months before qualifying for the award, to verify currency as a pilot, in accordance with Title 14 of the Code of Federal Regulations, part 61, section 61.56. This may include completion of a phase of the FAA Pilot Proficiency Award (WINGS) Program.

• Have three letters of recommendation from holders of FAA pilot certificates.

• Have been a U.S. citizen for the 50 consecutive years.

• Revocation of any airman certificate will disqualify a nominee for this award.

• Prior accident history will be considered and may be disqualifying.

• Civil penalty or suspension will automatically disqualify a nominee for this award.

To view the entire list of requirements, and to obtain an application form, go to http://www.faa.gov/safety/awards/wright_bros/

Note: Even though Larry Olson had a valid medical certificate until becoming active in light sport aircraft, many pilots believe they don’t qualify for the award because they may have lost qualification for a medical certificate. A pilot holding an airman’s certificate MAY log dual instruction received AND Pilot In Command time when receiving that dual flight instruction if already licensed for that category and class of aircraft, and may also log PIC time when accompanied by a safety pilot.

If you know of someone who may qualify, contact your local FAA Flight Standards District Office.

EDITOR’S NOTE: Jim Hanson is the long-time fixed base operator at Albert Lea, Minnesota. He is looking forward to qualifying for the award himself, but says, “I have to not only stay alive for two more years, but harder yet, I have to stay out of trouble!”