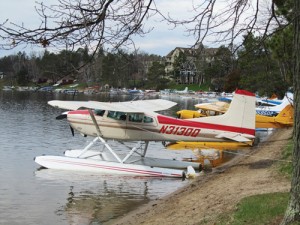 Dozens of floatplanes line the beach at Madden’s Resort.

A fish fry in Madden’s lodge kicked off the event May 6, followed by an FAA Safety Seminar.

MnDOT Aeronautics Director Chris Roy was first to speak May 7 on what’s happening statewide in aviation. Roy shared his concern with the growing numbers of wind turbines and cellular towers, especially the unmarked ones. Roy’s office is trying to make it mandatory for towers above 250 feet AGL to have lighting in Minnesota.

Roy said that meteorological (MET) towers that are installed to test winds before a wind turbine is built are not lit and are 200 feet tall. Wind turbines can be 500 feet tall with blades up to 100 feet long.

MSPA President Mary Alverson followed, sharing her one-month seaplane adventure in a Cessna 206 amphibian across the Rockies and down to Panama City. The aircraft eventually ended up in Argentina where its owner, Patrick Schmidlin of Switzerland, owns property.

“Nothing goes as planned,” said Alverson. “One thing I learned was to expect the unexpected!”

Bad weather plagued Alverson and Schmidlin. Alverson said that the next time she makes a trip to South America or Central America, she would prearrange “handlers” at each stop to avoid any hassles with customs and to arrange for the various permits that are required. “You get a bill for everything when you arrive at an airport,” said Alverson. “Even for parking your plane.” The Cessna dealer in Guatemala City was very helpful, however.

Alverson noted that required documents include one’s aircraft registration certificate, certificate of aircraft insurance, pilot certificate, and pilot medical certificate. She highly recommends pilots leasing or buying a satellite telephone for such a trip ($1,200.00 to purchase or $65.00 per month to lease), and purchasing a “Spot Messenger” GPS emergency and tracking device ($149.00 to purchase plus $149.00 subscription). Lake and Air Training & Pilot Shop, located at Fleming Field in South St. Paul, Minn., which exhibited at the seminar, sold out of the Spot Messenger within minutes after Alverson’s presentation (www.lakeandair.com). Of course, a survival kit and life jackets are a must, as well as knowing how to use them.

Alverson said that “fuel” determines one’s course of action and flight plan on a trip in desolate regions of the world, and you pay whatever the going rate is. Taking fuel samples is a good habit to get into to avoid contaminated fuel, she said. Alverson summarized her experience by encouraging fellow pilots to do their homework before embarking on a trip like this.

Other topics and speakers included a float manufacturers update, update on pilot medicals (pilots are now allowed one DUI violation below a certain blood alcohol content without certificate revocation), and updates by the Minnesota Department of Natural Resources, Lockheed Martin Flight Service, Transport Canada, and MnDOT Office of Aeronautics. Bob Timm of Seaplane Service, Inc., Surfside Seaplane Base, Lino Lakes, Minn., provided information on preventive maintenance. A life jacket demonstration wrapped up the day in time for the evening banquet and the entertainment that followed. F-16 Falcon pilot, Lt. Col. Troy Zierden, from the 148th Fighter Group of the Duluth Air National Guard, was the guest speaker.

The next morning following breakfast, most of the 32 floatplanes that landed at Gull Lake, and the 12 planes that flew into East Gull Lake Airport (9Y2), departed one by one.

The dates for the 2012 Minnesota Seaplane Pilots Safety Seminar & Fly-In are May 4-6 (www.mnseaplanes.org).