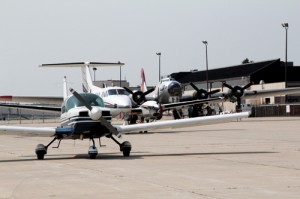 Abraham Lincoln Capital Airport is located in the heart of Sangamon County, Illinois, approximately 3 miles north of the city of Springfield, Illinois. The original development at Capital Airport was initiated in 1946 and completed in 1947 as the result of a cooperative effort between the federal Civil Aeronautics Administration and the Springfield Airport Authority. Primary federal interest in the development was based on the Defense Landing Area program which was a World War II program designed to assist communities in developing airport facilities, which could readily be taken over for defense purposes if conditions of national security warranted such a need. Many airports constructed under this program were used for military purposes during World War II and, following the war, were returned to the local public sponsor for operation. Capital Airport has never been operated as a military facility except for Air National Guard operations, but that option is still available.

In 2005, the airport’s official name was changed to honor a long-time Springfield resident and the 16th President of the United States, Abraham Lincoln.

For pilots looking for an airport restaurant, try the “Subway Restaurant,” open daily in the main terminal, serving breakfast, lunch and dinner.

There is a lot of general aviation presence at the airport, including 151 T-hangars and eight (8) larger corporate hangars.

StandardAero is one of the largest independent aircraft maintenance, refurbishment and overhaul (MRO) service businesses in the world, and their facility at Abraham Lincoln Capital Airport provides complete and comprehensive services on many corporate jet aircraft, including engines, auxiliary power units, airframes, avionics, and interiors.

There are plenty of airport development projects underway including construction of a new main entrance to the Illinois Air National Guard base, and replacement of the perimeter fence with a 10-foot fence to enhance wildlife protection and airport security. Two feet of the fence will be buried underground to prevent burrowing by animals.

Mark Hanna has been the executive director for the Springfield Airport Authority at Abraham Lincoln Capital Airport (SPI) since January 2007. From 1998 – 2007, he served as the Airport Director for the City of Quincy, Illinois at the Quincy Regional Airport/Baldwin Field (UIN). Hanna started his career in airport management as an assistant airport manager intern at Rusk County Airport in Ladysmith, Wisconsin, during his final year of college.  After graduating from the University of North Dakota he served as an instructor for the North Dakota Army National Guard before taking a position at Mason City Municipal Airport, Mason City, Iowa.

Hanna is married and he and his wife have two sons.