The Upper Deck… For Quick Turnarounds or Leisurely Dining! 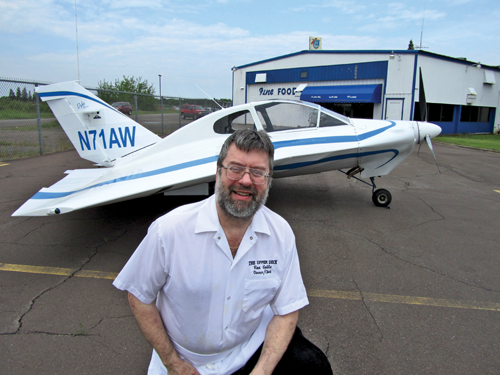 Owner Ron Goble purchased the restaurant in 1998 after operating a number of highly successful restaurants in the area. Goble has been in the restaurant business since he was 17. Three members of his current staff have been with him for more than 30 years.

The restaurant was originally an aircraft hangar with a small restaurant on the second floor. Over the years, the entire hangar was converted to the restaurant that is operated today, which is all on the main level. The Upper Deck has a banquet room, ample parking for cars and planes, and is handicap accessible. Up to 65 people can be seated for banquets, parties and business functions. Catering is also available.

The restaurant has a daily buffet, and a full menu for breakfast, lunch and dinner. There’s a Sunday breakfast buffet and monthly specials. For those not flying, cocktails are available.

“We are not a trendy restaurant, but we offer good food, friendly service, reasonable prices and pride ourselves in having a casual, hometown-type of atmosphere,” says Goble.

Breakfast is always a favorite of pilots, especially on the weekends. Get a short or tall stack of buttermilk pancakes, golden crisp Belgian waffles or French toast made with Texas bread. Eggs, hash browns, sausage links, ham and bacon, toast, English muffins, cinnamon rolls, and oatmeal with cinnamon and brown sugar, all come ala carte. A children’s menu is priced for the proportions served. There are breakfast combinations, chef’s features, and omelets.

Or how about some pickled herring appetizers, or the Upper Deck’s fabulous salad bar, the grilled chicken Caesar or chicken oriental salad.

I know what you are thinking. How can an airport restaurant have such a large and diverse menu? Don’t think about it. Just make the flight to Richard I. Bong Airport in Superior, Wisconsin and enjoy! And while you are there, take time to tour the new William Amorde Terminal Building, then call ahead and ask Bill himself to arrange for ground transportation to the “Richard I. Bong Veterans Historical Center,” featuring a P-38 Lightning like the one flown by Medal of Honor recipient, Major Richard I. Bong during World War II.