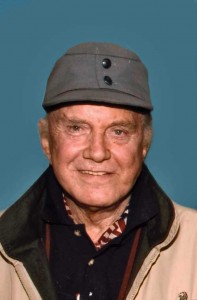 PILOT/ACTOR, Cliff Robertson, who lent his support to the Experimental Aircraft Association (EAA) over the years, and served as the organization’s first EAA Young Eagles Chairman from 1992-94, died September 10, 2011 on Long Island, New York, just one day after his 88th birthday. Robertson began flying at age 14 and had been an EAA member since 1964 (EAA 18529). He began his own flying career in southern California, biking more than 10 miles each way to a local airport for flying lessons, often paid for by working at the airport. This background led him to fund the “Cliff Robertson Airport Work Experience Program,” which annually offers young people opportunities for summer internships at the EAA Aviation Center at Oshkosh, Wisconsin.

Robertson was the 1987 recipient of EAA’s “Freedom of Flight Award,” the organization’s highest honor.

In 1990, Robertson received an award for his contributions to the air show entertainment industry.

Robertson owned a British Supermarine Mark IX Spitfire in which Jerry Billing of Woodslee, Ontario, flew in air shows for many years. The aerial demonstrations gave millions of air show spectators the opportunity to see the aircraft perform aerial combat maneuvers and thus learn about the heroic acts of veteran aviators like Billing, who served with Squadron 19 in the Royal Air Force during World War II.

Dave Weiman, President of Flyer Publications, Inc., had the honor of introducing Robertson at EAA’s Theater In The Woods on August 1, 1990 during EAA AirVenture in Oshkosh, Wisconsin, and kept in contact with him over the years. Weiman described Robertson as a celebrity who never forgot his roots in aviation, or his humanity.

Weiman recalled that when 1980 World Aerobatic Champion and renowned air show performer, Leo Loudenslager, died in 1997 due to complications from injuries sustained in a motorcycle accident, a poem written by Robertson entitled “Where Have All The Old Planes Gone?” was read by air show performer Sean D. Tucker, and published in the book “Tales from the Cockpit” by John McCollister (http://books.google.com). “The poem was a fitting tribute to Leo, and is now a tribute to its author,” said Weiman.

Robertson owned a number of other aircraft during his lifetime, including a Beech Baron, which coincidentally he was flying on September 11, 2001 when the World Trade Center was hit. After taking off from a New York area airport that day, Robertson recalled air traffic control requesting that he land, as all aircraft were being grounded. He also recalled seeing the first smoke from the World Trade Center.

Robertson’s acting career was highly recognized, as he was one of the few actors to earn both an Emmy in 1965 for his television appearance in “The Game” on the Chrysler Theater, and an Oscar for Best Actor in the motion picture “Charly” in 1969. Robertson also starred in a number of war movies, including “PT 109” in which John F. Kennedy himself requested that Robertson portray him, and “The Devil’s Brigade.” More recently, Robertson played Uncle Ben Parker in the “Spider-Man” films. Robertson appeared in some 60 movies in all.

A Hollywood reporter once asked Cliff Robertson if winning an Oscar or an Emmy was his biggest thrill in life, and Robertson replied: “Neither. It was going above 26,000 feet in a glider!”