Sharing the sky and the airport environment with birds and other wildlife has been a safety and economic concern for the aviation community since the Wright brothers first flew. Orville Wright documented the first known bird strike during a flight over a cornfield near Dayton, Ohio in 1905. A more recent example illustrating the danger of bird strikes occurred over the Hudson River when U.S. Airways Flight 1549 was forced to make an emergency landing after Canada geese were ingested into both engines. Globally, wildlife strikes have killed more than 229 people and destroyed over 210 aircraft since 1988. Each year in the U.S., over $600 million is lost due to wildlife strikes with civilian aircraft. 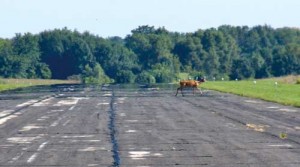 A Whitetail deer grazes on the end of the runway.

In Wisconsin, we don’t worry too much about reptiles, but white tail deer and waterfowl pose significant aviation hazards. Most deer strikes occur in the fall, with about one-third concentrated in October and November. Nearly two-thirds of terrestrial mammal strikes occur at night. About 63 percent occurred during the final approach or landing roll and 37 percent occurred during the take-off run or initial climb.

The following suggested operating techniques can help reduce the probability and severity of bird and mammal strikes to general aviation aircraft:

• Before takeoff, check the runway for wildlife. Many birds stand on concrete and asphalt surfaces to warm themselves and to gain a clear view of approaching predators.

• Use landing lights during takeoff. Although there is no conclusive evidence that birds see and avoid aircraft lights, limited data and anecdotal evidence suggest landing lights—particularly pulsed landing lights—make the aircraft more visible to birds and provide more time for animals to take evasive action.

• When encountering birds en route, climb to avoid a collision. Birds in flocks generally distribute themselves downward, with lead birds being at the highest altitude.

• Be prepared to lower your head below the glare shield if a bird strike appears imminent.

• Fly at higher altitudes to reduce the probability of a bird strike.

• Avoid flying over known areas of bird concentration and flying at low altitudes during bird migration. Charted wildlife refuges and other natural areas attract high concentrations of birds, which may create a hazard to aircraft.

• If a collision occurs, fly the aircraft first. Assess the damage and decide whether you can make it to an airport or if you should make an off-airport landing. Declare an emergency – it doesn’t cost anything. Even if no damage is visible, divert to the nearest airport and have a mechanic look at the airplane.

• Before takeoff, taxi down the runway to try and scare away any animals near the runway.

• When landing, make a low pass down the runway. This will allow you to see what might be on the runway and hopefully scare away any wildlife. 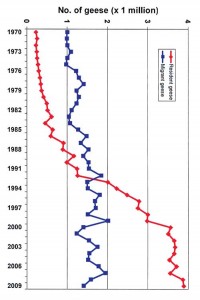 Pilots, airport operations staff, aircraft maintenance personnel, or anyone else who has knowledge of a wildlife strike should report it. It is important to include as much information as possible on Form 5200-7, which is available at http://wildlife-mitigation.tc.faa.gov. The identification of the species of wildlife struck is particularly important. Bird strike remains that cannot be identified by airport personnel can often be identified by a local biologist. Reporting wildlife strikes is invaluable in determining the size, nature, and severity of the wildlife strike problem. The database provides a scientific basis for identifying risk factors, justifying, implementing and defending corrective actions at airports, and judging the effectiveness of those corrective actions.

The Wisconsin Bureau of Aeronautics (BOA) works with airport managers and local developers to help minimize the chances for wildlife strikes. Public-use airport operators are required to implement FAA Advisory Circular 150/5200-33B: Hazardous Wildlife Attractants On or Near Airports, which describes hazardous wildlife attractant types, appropriate separation distances between them and airports, and procedures for wildlife hazard management by airport operators. BOA has developed and put on its website a mapped representation of the required separation distances for Wisconsin’s State Airport System Plan airports:  (http://www.dot.wisconsin.gov/business/engrserv/airports/aoa.htm). This aerial photo-based mapping allows airport operators to determine which local area construction projects (e.g. storm water ponds) are likely to present wildlife hazards to the airport.

BOA has worked with developers of government and private sector construction projects to avoid or minimize potential wildlife hazards of their projects. In 2011, BOA worked on 14 projects occurring within the minimum airport separation distances, including storm water management ponds, borrow pits, and wetland mitigation sites.

Avoiding a wildlife strike requires planning and vigilance by both pilots and airport managers. Extra caution is required in the fall when migrating birds and whitetail deer are especially active. While eliminating wildlife strikes may prove difficult, taking reasonable steps to prevent them, and understanding more about when and why they happen, can minimize the chances of one of these damaging and potentially life-threatening events from occurring.

The next WisDOT Flight Instructor Refresher Course (FIRC) is scheduled for November 5th and 6th, 2011 in Oshkosh, Wis. at the FAA Safety Center. The course is open to certified flight instructors whose certificates expire in November or December of 2011, and January or February of 2012. Other pilots can audit the course at a reduced fee and receive a certificate of completion. For more information, visit the WisDOT website at: http://www.dot.wisconsin.gov/news/events/air/firc.htm where you can find a link for on-line registration and payment.

The Mechanics’ Refresher and Inspection Authorization (IA) training seminar will be held February 25, 2012 at the Holiday Inn Hotel and Convention Center in Stevens Point, Wis. WisDOT holds the refresher course annually for A & P mechanics with inspection authorization that need to fulfill their annual training requirement. About 30 vendors will be available to discuss their products during breaks. Registration is $30, which includes lunch. More information can be found on the WisDOT website at: http://www.dot.wisconsin.gov/news/events/air/aviation-mechanic-seminar.htm.