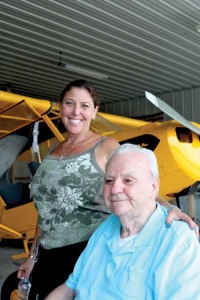 Jim Leonard with his friend and caregiver, Jane Kapusta.

Before Jim Leonard could take the ride of his life, he needed to get in the plane. And that’s harder than it sounds.

Jim is 90, uses a wheelchair and has a slew of health problems – including trouble bending and stretching, stemming back to a stateside aircraft accident during World War II and the many surgeries that followed. He’s also a big guy and mostly blind.

With some pushing, pulling, scooting and the support of three men and his pal, Jane Kapusta, Jim made it into the cockpit of a 1975 Piper Archer I. Though sweating and sore, he put on his aviator glasses and smiled with his whole face. “They should build a plane around me,” he joked.

It was a beautiful August morning for a joyride from Iowa County Airport in Mineral Point, Wisconsin. Pilot and Air Force veteran, Pat Ripp, took Jim and Jane, along with photographer/videographer Spencer Blesi for a 45-minute sightseeing tour of southwestern Wisconsin, cruising at about 140 mph.

“Let’s buzz the nude beach (in Mazomanie, Wis.),” Jane joked. Whenever Jim and Jane are together, there’s a lot of goofing around. With their nonstop banter and mutual love of sarcasm, it’s easy to assume that Jim and Jane are related. In reality, Jane’s been Jim’s caregiver through Independent Living, Inc. for three years – and she orchestrated this magical flight, just like she organized one last year piloted by Jerry Johnson.

Before Jane came into his life, Jim was nearly homebound and mourning the loss of his wife of 56 years. His son, also Jim Leonard, notes a remarkable change in his dad since Jane arrived. “I think she has both added 10 years to his life and knocked 10 years off his age,” said his son.

Jane likes to take Jim on adventures that mirror his long-ago memories: visiting a horse stable, picking apples at an orchard, swimming and cutting the grass (with Jane’s help).

As a World War II pilot and flight instructor who participated in the “Battle of the Bulge,” these small-plane joyrides are food for Jim’s soul. He said he never expected to go on another plane ride, and afterwards Jim commented with peaceful solemnity, “I expect that was the last time I’ll be on a plane, and it was just wonderful. Like riding a bike.”

Even the pilot, Pat Ripp, commented, “Doing the flight for Jim was one of the best flights I have ever flown. I hope he enjoyed it as much as I did.”

Pat is also a veteran who served in the U.S. Air Force as a fighter weapons systems tech (1970-1974), working mostly on F-4D and F-4E Phantons. He did two tours in Vietnam/Thailand. He’s currently an Aviation Maintenance Technician Instructor at Blackhawk Technical College (until the program is shut down following the 2012 summer semester), and owns/operates Point Aviation, a general aviation maintenance facility at Iowa County Airport.

It was special for the World War II veteran and his Vietnam veteran pilot, his caregiver and all those present to witness and record the events. But as it turned out, that wasn’t Jim Leonard’s final flight after all.

After many months on a waiting list, Jim was given a spot on the “Badger Honor Flight” to see the World War II Memorial in Washington D.C. on November 12, 2011 – the day after Veteran’s Day. Jane, as his flight “guardian” and caregiver, was right by Jim’s side as usual.

“This is the best part about getting old!” Jim says. “I get all this attention and all these pretty girls around me. When I was younger, I used to have to work a lot harder for that.”

To learn more about Badger Honor Flights, go to www.badgerhonorflight.org.

EDITOR’S NOTE: Brooke Miller Hall is a freelance writer from Madison, Wisconsin. She and Amy Gangl wrote a screenplay about Jane Kapusta and Jim Leonard.