An Aviation Day At Your State Capitol!

We predict that what occurred on February 9th, 2012, at the State Capitol in St. Paul, Minnesota, in holding an “Aviation Day At The Capitol,” will be repeated in capitols throughout the country as pilots, aviation business men and women, and airport officials realize that they must unite if general aviation is to survive and flourish.

Members of the entire Minnesota aviation community came together in St. Paul to meet with their elected officials to get them up to speed on their respective aviation issues, and to explain in general terms, how important general aviation and their local airports are to their local communities. 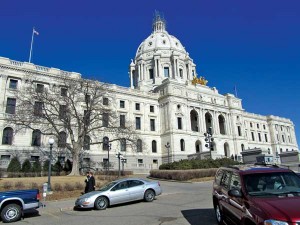 Anyone actively involved in aviation in Minnesota, and who believes in the importance of his or her local airport, was encouraged to participate.

From what I gathered from the meetings I attended, it appeared that every participant had a personal agenda…they wanted to preserve their piece of the pie, so to speak, and that’s okay. People have to be motivated to take time out of their busy schedules to participate in such events, and self-interests are a huge motivating factor. We believe that in the end, what benefits one person in aviation will benefit all of us.

The day began with a breakfast for all participants. Approximately 80 people showed up.

Each participant was given a packet of information, which included suggested talking points. Most participants had appointments with their state representatives to ensure that they would be available.

Pilots told their elected officials about the need for airport improvements and how this would affect their jobs and local businesses. Many airport managers, like Bill Towle of St. Cloud Regional Airport, expressed concern about having lost airline service. Students and faculty from St. Cloud State University told their elected officials why closing their aviation program will be detrimental to the school, community, state and country, especially with anticipated pilot shortages. 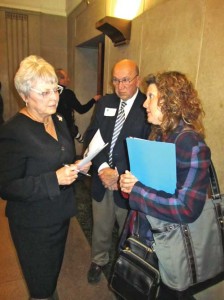 Sharon Sandberg of Princeton, Minnesota, met with state Representative Sondra Erickson from District 16A about getting an access road to the airport improved, and tried to dispel the myth that airports are just for the wealthy.

The elected officials we met seemed sincerely interested in their constituents’ concerns, and wanted to learn more about the issues. If nothing else was accomplished, Aviation Day At The Capitol provided an opportunity for constituents and their elected officials to get better acquainted for future dialogue.

Pilot and State Representative Mike Beard from Shakopee, Minnesota (District 35A), met with the group to commend them for taking the time to meet with their elected officials.

For additional information on Minnesota Aviation Day At The Capitol, or how to organize a similar event in your state, contact Gordon Hoff at gordon.hoff@comcast.net or call 651-398-4649.

This issue of Midwest Flyer Magazine is dedicated to four state aviation conferences being held in April and May, to seaplane flying, and summer travel destinations.