Miracle On The Lake! 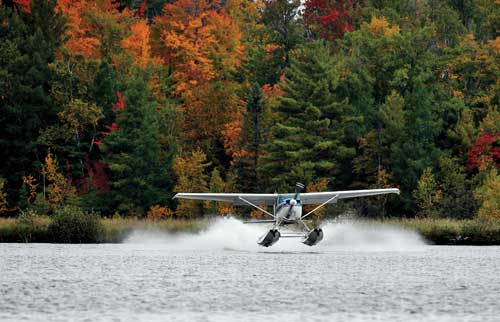 Seaplane splash against the fall colors in Three Lakes, Wisconsin.

What do you get when you combine the “Miracle on the Hudson,” a seaplane, a western cattle rancher and a hint of Elvis? Well, a fun seaplane weekend in northern Wisconsin, of course!

Two of the most famous guys to do a great job of landing an airplane without their seaplane ratings were Capt. Chesley “Sully” Sullenberger and First Officer Jeff Skiles. As you know, they managed to successfully land U.S. Airways Flight 1549 (an Airbus A320) dead-stick in the Hudson River on January 15, 2009, and then helped every single passenger of the 155 people on board make it safely to shore. Oddly enough, the two pilots were talking about seaplanes earlier that fateful day, with Skiles commenting that he hoped to take time soon to get his rating. Neither knew how quickly they’d be sharing the water-landing experience! 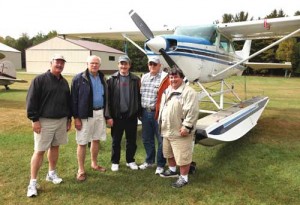 So at last year’s EAA Young Eagles dinner at EAA AirVenture, Lakeshore Aviation’s seaplane instructors Curt Drumm and Dave Schmutzler donated a silent auction seaplane ride with Skiles riding along. Beau Bradley, a cattle rancher from Montana (who also flies a couple of small tail draggers, a Cessna 195 and a new Citation Mustang) won the bidding. Curt, Dave, Jeff and Beau, along with Beau’s wife, Deb, met down at the seaplane base later during the week, and Beau got his first real taste of water flying.

After that, the wheels started turning. Why not have a seaplane weekend and get their seaplane ratings together? So the plan evolved, and ended up involving Clay Presley, a paper industry leader from North Carolina. That’s another story….Clay was one of the passengers aboard that ill-fated Airbus when it went down. His reaction to what could have been a near-death situation was anything but fear of aviation. At around 50 years old, he went out and got his private pilot certificate and bought a plane! Since then, Clay, Jeff and Sully have become good friends, and if Jeff or Sully weren’t in the spotlight, Clay was close behind. Seems the new-found celebrity status included all three of them!

So last October (2011), Jeff, Clay, Beau and Deb reunited at Lakeshore Aviation’s northwoods seaplane base in Three Lakes, Wisconsin. Situated on the scenic chain of 28 lakes that connect with Eagle River, it’s a seaplane pilot’s dreamland. Water everywhere, a seaplane dock, thousands of lakes, a guest cabin to call home, great hospitality, home-cooked meals and a seaplane examiner nearby. It turned out to be an incredibly interesting week!

Not only was the flying great, but the interaction between the two “survivors,” each with a different perspective, was wonderful. Sometimes it was actually like an old Laurel and Hardy shtick. Each had his own version of what happened, based on their seat….one being the pilot, the other a passenger in back. Skiles was acting as pilot when the plane hit the flock of geese. “He should have been paying more attention,” chuckled Clay.

They were only two minutes into the flight. In a true example of airline training, the crew went to work. Sully took the controls and Jeff started the emergency checklists, trying to restart the engines. They tried to identify airports for an emergency landing, and when they realized that none were close enough, they chose the river. It was big, it was wide and there were no obstructions. Well, except for the George Washington Bridge, which they skillfully glided past.

When asked “Were you concerned about the passengers?” Skiles calmly answered, “We really didn’t have time. It was only minutes before impact, and we were busy doing what we were trained to do; control the airplane.” Presley, on the other hand, was just visualizing how to get out of the plane. “I never realized how important it was to pay attention to the flight attendant’s briefing,” he said. “Knowing where the closest exits are is incredibly important.” Clay was one of the first out, and assisted many others in their escape. A big smile came over his face when he pointed to himself standing on the wing of the sinking airplane. In the end, only a couple people had minor injuries. Everyone survived. It was truly a “miracle” that the plane, crew, passengers, river, nearby boats….everything…just worked right. “I have a lot of respect for those guys,” Clay said of the entire crew, including the flight attendants. “Everyone did their job and made sure we were safe. Looking back, it was great to see, although pretty scary at the time.”

After a week up north, everyone was ready to wrap things up, but the weather wasn’t quite as good. Fog, rain and low clouds grounded the group more than they hoped. Beau, who had flown to Wisconsin on the way to a Cessna 195 convention, got his checkride done first. Clay and Jeff met Curt and Dave in Shawano a couple weeks later and got theirs completed. All three now proudly hold new seaplane ratings, and Curt and Dave got to share some great memories with them. Oh, and Elvis? That was one of Clay’s shirt-tale relatives….a something-generation cousin. Clay remembers meeting “the King” at a family reunion many years ago…a classy man he got to talk to for awhile.

New friends and airplanes…what else can you hope for?  Look for us at Oshkosh this summer…we’ll be the group smiling and hanging out down at the seaplane base on Lake Winnebago. The group plans a reunion and refresher seaplane time and will be camping together this year in Camp Scholler at EAA.

EDITOR’S NOTE: For more information on seaplane training, contact Curt Drumm at Lakeshore Aviation at 920-682-0043, or visit their website at www.lakeshoreaviation.com.