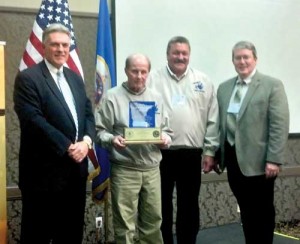 ROCHESTER, MINN. – For many years, the Federal Aviation Administration and the Minnesota Department of Transportation Office of Aeronautics have partnered with public airports throughout Minnesota. One result of this partnership is the annual FAA/Governor’s Award, which is presented cooperatively by the FAA Great Lakes Regional Office and the Governor of Minnesota. The honor has been awarded to airports at the Minnesota Airports Conference since 1988. This year’s conference was held April 11-13, 2012 at the Mayo Civic Center in Rochester, Minnesota.

The award recognizes excellence in airport planning, development, operation, maintenance, and public relations. This year’s FAA/Governor’s Award was presented to Walker Municipal Airport for its dedicated support of aviation, and their successful and innovative project accomplishments.

The City of Walker has always recognized that its local economy is dependent on tourism, which is evident in the city’s motto, “Where people come to play.” Those looking for the peace and solitude of the northwoods have made Walker, Minnesota, their destination for many years, often coming to relax and recreate on the shores of Leech Lake.

Walker Municipal Airport started out as a humble 2,500-foot turf landing strip carved out of the woods on acreage the city purchased in 1951. It remained a turf strip with limited facilities until 1977 when the runway was relocated and paved. As the airport attracted more users and larger aircraft, the city added runway lights, a paved apron, and tie-downs.

In 1990, wishing to improve the viability of the airport, the city assigned the airport manager’s position to longtime pilot, businessman, and city councilor, Ken Bresley. With Bresley’s guidance, the city made multiple improvements to the airport, enhancing safety and utility for both local and transient pilots. In 2004, the airport increased its based aircraft and storage capacity by constructing a 10-unit hangar and providing self-service fuel. The city successfully applied for inclusion in the National Plan of Integrated Airport Systems (NPIAS), greatly increasing its funding potential for airport improvements.

Another way the City of Walker invested in its future was by creating an Airport Layout Plan. The plan charted the way for a multitude of infrastructure improvements, most notably the runway reconstruction and extension, new runway lighting, and the construction of a parallel taxiway. The layout plan set in motion a decade-long process of in-depth planning, completing a narrative report, environmental studies, land acquisition, design, and multi-year airport improvement projects. One of these projects extended 420 feet to the existing runway, bringing the total length to 3,220 feet. Most recently, the FAA, MnDOT Office of Aeronautics, City of Walker, and the city’s consultant, Short Elliott Hendrickson, recognized a need to establish a parallel taxiway to improve airport safety. After extensive analysis, the planning team determined that creating a parallel taxiway to the east of the runway would mitigate environmental impacts and provide a high level of safety for aircraft operations. Today, the city’s efforts to improve services and safety to airport customers are continuing with plans to replace the aging arrival/departure building and provide an instrument approach.