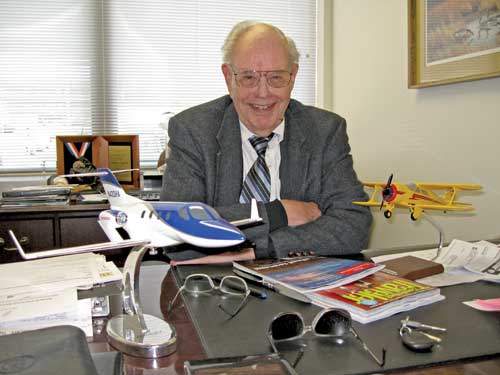 DES MOINES, IOWA – Howard Verne Gregory, 94, Chairman of Des Moines Flying Service, Inc., died July 24, 2012, at Wesley Acres retirement village in Des Moines, Iowa. Gregory, who went by “Greg,” was born in Aurora, Illinois. He is survived by two daughters, Linda (John) Lowe of Des Moines, Iowa; and Laura (David) Jackson of Arrow Rock, Missouri, and their families; as well as Gregory’s many friends, business associates, and employees, including longtime employee Dee Price of Des Moines, who recently retired. Gregory was preceded in death by his parents and his wife, Alice “Bea” Gregory.

While attending Drake University, Gregory served as a contractor for the Civilian Pilot Training (CPT) program during World War II, and was proud to have trained members of the Tuskegee Airmen, including Luther Smith, who went on to become the Senior Vice President of General Electric.

Des Moines Flying Service has been affiliated with Piper Aircraft for over 73 years and has sold literally thousands of new and used Pipers and other aircraft makes worldwide. As a factory-direct Piper Cheyenne turboprop dealer, DMFS has sold more new and used Cheyennes than any other dealer in the world. Also, since 1984, the company has sold over 150 Malibu and turbine-powered Meridian aircraft. Today, DMFS is an exclusive Piper dealer for Iowa, Minnesota, North Dakota, South Dakota, Nebraska, Wisconsin and northern Illinois. The company’s Piper Service Center is considered one of the largest in North America.

DMFS’s sales, maintenance, avionics and parts departments are focused on selling and supporting an array of general aviation aircraft including Piper, Beech, and Cessna Citations.

In addition to providing complete general aviation maintenance services, DMFS is contracted to take care of the airline maintenance needs in Des Moines on an on-call and scheduled basis — 24-hours a day, seven days a week. DMFS is currently contracted to provide this service to 18 air carriers at Des Moines International Airport.

In August 2006, Des Moines Flying Service was selected to be one of five dealers to sell the all-new HondaJet exclusively in 12 Midwestern states including Illinois, Wisconsin, Iowa, Minnesota, North Dakota, South Dakota, Nebraska, Kansas, Missouri, Indiana, Michigan and Ohio. The company, operating under the trade name “HondaJet Midwest,” will be headquartered at Chicago/Aurora Municipal Airport.

Howard Gregory amassed 17,000 flying hours in his career, once served as chairman of the National Aviation Trades Association (NATA), and was a member of numerous aviation organizations, including the Quiet Birdmen.

“Everyone in the aviation community looked up to Greg, whether student pilot or aviation professional,” said Dave Weiman of Midwest Flyer Magazine. “His excitement for flying was contagious…his knowledge of flying, unsurpassed…his contributions to aviation, many!”