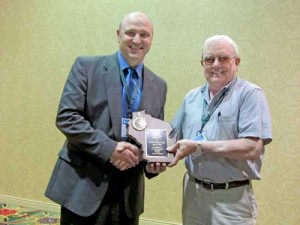 In accepting the award, Hartwig recognized his parents, Carl and Nancy Hartwig, who founded the company in 1962. The Hartwigs emphasized solid work ethics throughout their careers and in raising their children.

“This award represents hard work and doing things right,” said Kurt Hartwig. “I travel across the country and am very proud of being from Wisconsin, Eagle River and proud of everyone who works hard to make aviation great in our state.” Hartwig also served on the Eagle River Union Airport Commission for 11 years.

Eagle Fuel Cells is located in two buildings on and near the Eagle River Union Airport (www.eaglefuelcells.com).

The Wisconsin Aviation Trades Association (WATA) was founded in 1946 and represents aviation businesses throughout the state of Wisconsin.