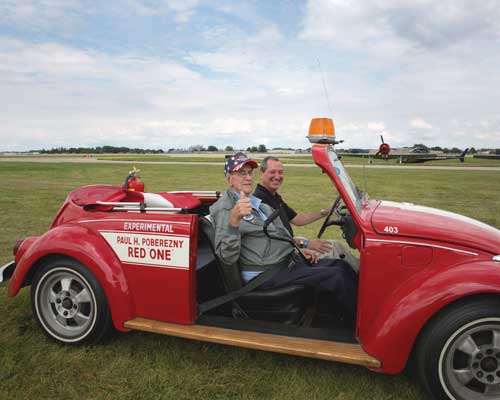 Experimental Aircraft Association (EAA) Founder Paul Poberezny, 91, passed away August 22, 2013 at Evergreen Retirement Village in Oshkosh, Wisconsin, after a battle with cancer. Just three weeks prior, Paul attended his last EAA AirVenture, and gained strength from everyone and everything he saw.

The Poberezny family has expressed their deep appreciation for all the support shown to them, and especially to Paul and Audrey, over the past five months:

“As Paul often said, he considered himself a millionaire because through aviation, he made a million friends.”

Paul Poberezny leaves an unmatched legacy in aviation and can best be remembered by all the people who discovered aviation through his inspiration to create EAA.

He was an inspiration to all pilots, aircraft restorers, aircraft builders, and aviation leaders. He will be remembered by everyone he touched, and in unique and personal ways.

For Peggy and I, we will never forget his first phone call after he received a copy of the first issue of the magazine in December 1978. His support and encouragement then and over the past 35 years, meant a lot to us. Both Paul and Audrey could relate to our work and what we were trying to accomplish.

Whether it was a handshake, a hug, a photograph, an autograph, a few words of encouragement, or working side by side with someone in his shop building an airplane, or in the trenches working on industry affairs, Paul definitely touched many lives, and will live on in each of us through our future good deeds and involvement in aviation.