U.S. Congressman Reid Ribble (left) recognized the importance of the new general aviation ramp at Outagamie County Regional Airport (KATW) in Appleton, Wis. to the economy of northeast Wisconsin. Gulfstream Aerospace uses the airport for one of its major aircraft maintenance facilities, and employs over 1,000 people. Other businesses are also booming in the region and rely on the airport. The airport also serves as a major reliever airport for EAA AirVenture Oshkosh each year. Outagamie County Regional Airport is served by the airlines and features Wisconsin's newest fixed base operation, Platinum Flight Center. Abe Weber (right) is airport director. Midwest Flyer Magazine Photo by Dave Weiman

APPLETON, WIS. –  If you are one of the growing number of pilots who fly to Outagamie County Regional Airport in Appleton, Wisconsin, for EAA AirVenture Oshkosh, you – and hundreds of other aircraft owners – will be treated to a new ramp in 2015. 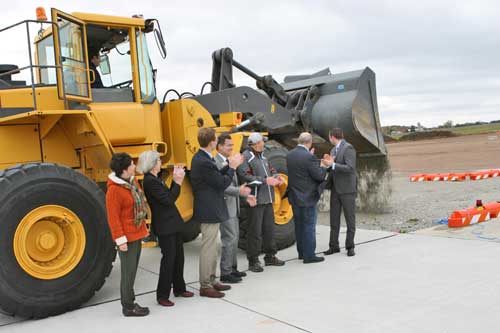 “I support the work being done at Outagamie County Regional Airport to expand the South General Aviation Ramp,” Ribble said. “When completed, this project will support both general and business aviation, which are integral to our economy here in Northeastern Wisconsin.” Federal funds will cover 90 percent of project costs; state and county funds will each contribute five percent.

Outagamie County Executive Thomas Nelson joined Congressman Ribble, saying, “This ramp expansion is the next phase in the planned growth of our General Aviation area. The new ramp will add 245,880 square feet of pavement for aircraft parking and enable us to offer more services at Outagamie County Regional Airport.”

“EAA traffic was up 9% this year, and our new LEED Platinum FBO impressed everyone who flew into Appleton,’ Nelson added. “EAA pilots told us they want more hard-surface parking, and this ramp expansion will meet that need during the busiest week of the year.” This was the first time in years that aircraft had to be turned away from Wittman Regional Airport due to sheer volume. Hundreds of pilots also prefer less congestion at the Appleton airport.

In addition to supporting daily general aviation traffic, the new ramp will provide a secure location for military charters.

This project is being undertaken in accordance with sustainability practices. Contractors are importing 47,000 yards of base material from another location on the airport, helping to reduce transportation and material costs and mitigate environmental impact. Officials estimate more than 1,000 truckloads of concrete will be used to complete the ramp.