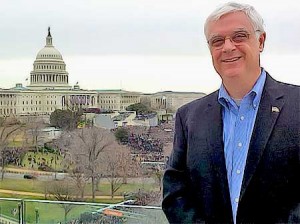 Washington, D.C., November 5, 2014 – The National Association of State Aviation Officials (NASAO) announced today that Greg Principato has been named President and CEO of the 83 year-old organization based in the Washington D.C.

Principato, who most recently served as President and CEO of ACI-NA from 2005-2013, was a Trade and Transportation Specialist at Hunton & Williams from 1991-2005 and served as Executive Director of the National Commission to Ensure a Strong Competitive Airline Industry in 1993.

“I am excited to be joining the NASAO team as its President and CEO,” said Principato. “From my time working for an innovative, transportation-oriented Governor through my career in aviation, I have become convinced that the states are “where it’s at” when promoting aviation as a force for building modern communities connected to the national and global economy.”

Principato, worked in the administration of Virginia Governor Gerald L. Baliles from 1986-1990 and on the staff of US Senators J. Bennett Johnston (1979-81) and Joseph R Biden (1982-86). Currently, he is a Senior Advisor to National Strategies LLC and owns his own consulting firm.

“Aviation needs a strong NASAO, and its members and I share that vision,” said Principato, who will take the reins of the Association on November 17th. “I want to thank NASAO Chair Carol Comer and the entire board for their confidence in me.”

Comer, NASAO Chair and Director of the Division of Intermodal for the Georgia Department of Transportation said that the NASAO Board is pleased with the selection. “On behalf of the Board of Directors of NASAO we are pleased to welcome Greg as our new President and CEO. Greg’s prior experience leading an aviation association provides a solid foundation on which to develop new value for our membership and strengthen the voice of NASAO as an advocate for public aviation policy.”

Principato also expressed his thanks to Kim Stevens and Bridgette Bailey for their hard work these past many months. “Their hearts and souls are totally invested in NASAO.” Principato said he was humbled and deeply honored to follow his good friend Henry Ogrodzinski as President of NASAO.  “He was a legendary aviation leader and a very good friend of mine,” said Principato. “I will call upon him often for inspiration and guidance.”