I was recently asked what it takes to stay current according to the FAA. My immediate reaction was: “That’s simple.” Well, no it really isn’t. Just like most things in flying, staying  current has become more complex as the technology moves forward and the options open to us as pilots have increased. However, the complexity has generally not tracked the increase in pilot certificates.

There is basically only one different requirement applying to recreational pilots. All the rest have the same requirements within the restrictions that may be imposed by the limitations of the certificate themselves. It must also be stated that the FAA defined currency requirements are set up as the minimum. Without question, there are many pilots who can maintain safe operations without the frequency defined by the FAA. And there are those pilots who could use even more time and maneuvers. As with many things defined by a bureaucracy, the results probably don’t fit many people very well, but hopefully serve the overall goal of flight safety.

Before going any further, it is necessary to make a disclaimer: I am NOT an expert on FAA regulations! As an instructor I need to know the general structure of regulations, but I am not an expert in relating one to the other. What that means for this article is that I am confident that the things I spell out are required… I am NOT confident that I have caught everything.

For readability, we will use only the usual FAR Part 61, 91 designations in this discussion, as we commence to discuss requirements to become and remain current.

An excellent guide and detailed information on what should be included in the reviews of FAR Part 61.56 and 61.57 can be found in FAA Advisory Circular 61-98, which can be downloaded from FAA.gov/documents.

Before we get to the details, it is necessary to understand the FAA definition of “calendar” months. While there is a calendar “day” requirement for some Part 135 operations, most of us only have to deal with calendar months. The actual definition of a calendar month means from a date in one month to the same date in the next or preceding month. The FAA always refers to “x months” before or the “calendar month(s)” preceding an event or requirement. Since the reference is to the date within the current month, that means that anytime within the month because the actual date moves along from beginning to end. For example, we base things within a month, such as for the 15th – we look backward, or forward from that day. To check for our currency we are always looking backward. The result is a 13th-month year for our airplane annuals, etc., etc.

Another fact to keep in mind as we discuss the requirements for currency is that they can be combined. More on this later.

First, let us take up the well known and, worrisome, biennial flight review (BFR), now known as a Part 61.56 review. This requires that every 24 calendar months,  pilots are required to receive one hour of flight and one hour of ground instruction under Part 91 rules, the focus of which is spelled out in the regulation. The FAA also publishes an advisory circular discussing the items to be covered.

There are two things about this that you need to know. First, Part 61.56(c) states in part, no person may act as pilot in command (PIC) unless, since the beginning of the 24th calendar month before the month in which that pilot acts as pilot in command, that person – etc. etc. This statement is not limited to specific certificates. Therefore, Private, Sport, Recreation, Commercial, ATP pilots are all fair game because each is stated by the FAA as permitted to act as pilot in command. The only difference is that “glider pilots” can use flights, rather than hours. The second thing one needs to know is that this review does not need to be done at one sitting. It can be spread out as far as the instructor wishes. It is good for 24 calendar months from the date the instructor signs it. Further, this review may be conducted simultaneously with other currency requirements, such as those in the next paragraph. Also, obtaining a new rating can constitute as a BFR. Ask your instructor or examiner to be sure your situation applies. In any event, this is a good reason to check with your flight instructor to see if he/she is willing to count any dual or ground instruction you receive toward the 61.56 review.

Recent Flight Experience for VFR flight is spelled out in Part 61.57. This is the well-known 90 days, three take off and three landing requirement. For daytime, touch and goes work fine except for tail wheel aircraft. Night operations and tail wheel aircraft require landings be to a full stop. Three things to remember here: First, the only restriction is on carrying passengers. Got a single-place airplane or never carry passengers? You can forget this one. If your certificate prohibits night flight, it is obvious you don’t have to worry about night landings. However, a little night training might be a good idea anyway, just in case. Second, this restriction does not limit the pilot’s ability to act as PIC; just from carrying passengers. Third, this is the one of only two requirements that is stated in days, rather than calendar months. Therefore, ya gotta count days!

The second requirement stated in days applies to Recreational Pilots and is spelled out in Part 61.101(g). This requirement applies to Recreational Pilots with less than 400 flight hours and who have not logged PIC time in an aircraft within the past 180 days (remember to count days again). If the 180-day PIC requirement is not met, it is necessary to obtain an endorsement from a CFI. This can be combined with the BFR defined in 61.56 or with the 90-day takeoff and landing requirements in 61.57.

The instrument currency requirements tend to be a big worry because they seem to be complicated. They are spelled out in Part 61.57c. The key to this is to realize that there are three stages…the first two of which are six calendar months each, and the third, taking however long it takes you to comply.

NOTE: It is only required that you complete enough operations to satisfy the requirements for the preceding six months. For example, if during the last three months of the first six-month period you had accomplished everything but the holding pattern, it is only required that you complete the holding pattern with a safety pilot within three calendar months of the other operations. Of course then you start all over because remember, the six-month period is a rolling one, so you go back six months every month to see if you meet the requirements. While doing all this, remember that whenever you are flying under the hood, you MUST have a safety pilot. The third level is that after one year of non-compliance, even if you are only short one item, you are required to obtain an Instrument Proficiency Check (IPC). The IPC is kind of like a mini checkride and the content is pretty much up to the person conducting the checkride within the confines of AC 61-98. Typically, I will require some ground discussion, three approaches, each of a different type, a hold and some partial panel work, all without me being frightened. At the discretion of the person conducting the IPC, it may be performed in IMC, whereas the checkride will have been in VMC.

If you are an instructor, you are already aware of the following requirement, but other pilots may not be aware. Therefore, for the sake of completeness, the following is offered.

Instructors are required to comply with all currency requirements applicable to their pilot certificate, but in addition, they need to renew their instructor’s certificate every 24 calendar months.

There are several ways to do this and they are spelled out in Part 61.197. As with many other requirements, passing a test for a new rating will count. Within the past 24 calendar months, submitting at least five students for a practical test for a certificate or rating and at least 80% of them passed, counts as well. Also, passing an approved flight instructor refresher course within 90 days of the certificate expiration date, will also suffice. There are other ways involving military and employment options. Those interested will find them in the referenced regulation.

In summary, the following table should help. 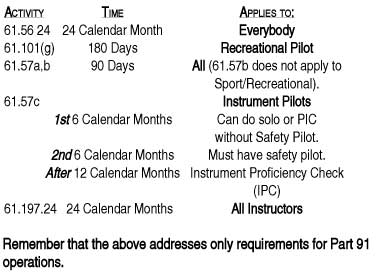 Finally, it should be pointed out that “currency” and “proficiency” are two entirely different things. Currency puts you in compliance with FAA regulations, the intent of which is to aid you in maintaining your proficiency. However, only you know your actual level of proficiency and hopefully will act accordingly.

*See article on “safety pilot requirements” by Greg Reigel in “Aviation Law – On Your Side,” immediately following this article.