Which George Is Steering The Airplane?

When I first got acquainted with autopilots, they were referred to by the pilots that flew them as, “George.” In this issue of Midwest Flyer Magazine, I will devote most of my column to “George” and some exciting new developments with ADS-B.

In the correspondence I receive from our readers, I get the most questions on autopilots. In fact, I would like to reference a call I received a few days ago from an instructor and his client that were trying to solve a problem with an autopilot in a Beechcraft Baron.

The problem they were having was that the autopilot would not capture the glide-slope using a King 225 autopilot with a flight director. I will admit that I did not solve this problem alone and had to call my dear friend, colleague and co-worker, Bill Hale of Ft. Collins, Colorado, who is an autopilot “Jedi.” There were actually two Georges involved and it seems there was a fight between them. There were two GPSS modules and it was unclear as to where the data going to the brain of the 225 autopilot was coming from.

First, let’s cover a bit of history and an understanding of the King 225 autopilot. 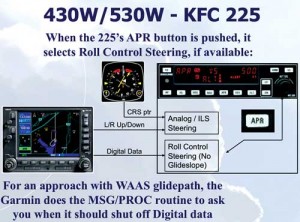 I believe that the King 225 was the first general aviation autopilot that had the capability of doing GPS-steering. As we were transitioning from using VORs to GPS, some of the early GPS receivers could output a digital data stream to allow the autopilot to make smooth and well-planned turns and better tracking. Like all of the autopilots to follow the 225, it is necessary to have two inputs – the digital input for the new GPS units, and the analogue one to provide the inputs from VORs, localizers and glide-slopes. We need to picture a GPS navigator (see Fig 1). In this example, we will use the Garmin 530, outputting two data streams, the analogue one and the digital one, regardless of whether or not the source is a GPS or VOR/Localizer. The autopilot must decide which one of those data streams to use and that is where the pilot enters the process. 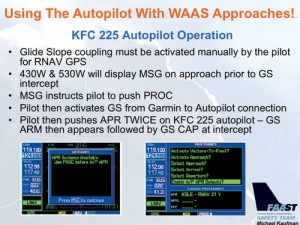 When your avionics installer first installs the system, he programs your GPS and autopilot to work together. In our example, the GPS senses that you are on an approach and gives you this message “APR Guidance Available” (Fig 2 Left), which is activated by pushing the procedure button on the Garmin 430/530 Navigator. This turns off the digital feed to the autopilot, so we now have an autopilot with no data input. The navigator then gives the pilot a message instructing him to “Enable AP APR Outputs” (Fig 2 Right). This is accomplished by pushing the “APR” twice. The purpose of the two pushes of the APR button is that this turns the approach tracking off and then back on again, and seeing that we have shut off the digital data stream when the autopilot comes back on, it only sees the analogue data stream and will follow it. Many of the later autopilots with later technology do not need the pilot to manually shut off the digital data stream for the autopilot to sense and couple to a glide-slope in analogue mode. 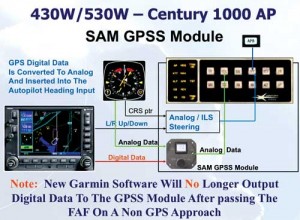 The recommended solution to fix this problem was to disconnect the data wire supplying the digital signal to the 225 autopilot and wire it similar to the unit displayed in Fig 3. The display in Fig 3 is what we typically find when we add GPS-steering to an older analogue autopilot. This diagram also shows what most aircraft are using with most of the older technology autopilots that are on the market. Note the comment at the bottom of Fig 3, stating that the newer firmware update from Garmin disables the digital data stream completely, once passing the final approach fix on non-GPS approaches. We tried this in a Cessna 182 with dual Garmin 430s, an S-TEC 30 autopilot, and GPSS steering, and we still had the digital data. We will be checking this one out and will report back in this column in a future issue.

In November 2015, while at the Bonanza/Baron flight training clinic in Norfolk, Virginia, one of the participants attending the clinic showed and demonstrated a homemade ADS-B receiver he had built for ADS-B “in.” I was quite impressed with the unit, and being an electronic geek, I decided to build one as well. I had all the parts required in my electronics/ham-shack, so the cost was a zero out-of-pocket expenditure. I was a bit skeptical at first, but after a brief test flight in a friend’s Cessna 182, I am calling it a great success!

The brain of the unit is a small microcomputer called a “Raspberry Pi” and is available for $35.00 from many Internet sources. There is a YouTube video on construction of the unit at https://www.youtube.com/watch?v=QE7kd-PJ2iE and documentation is available on the Internet.

The author/inventor, Christopher Young, claims the unit can be built for under $120 using new parts. Young needs much credit as his unit emulates the most popular, commercially available unit “Stratus,” which sells for between $600 to $800, depending on options, and is displayed and supported on “Foreflight,” which is the most popular aviation software for the iPad.

For those pilots who would rather spend money on a commercial product than build something, Bad Elf has introduced a new ADS-B receiver that they will be marketing. The basic unit sells for $295.00 and is a neat compact unit. It is being supported by many of the flight planning programs on the iPad, but Foreflight is not yet supporting it as of this writing.

In the June/July 2013 issue of Midwest Flyer Magazine, I evaluated the Skyguard TWX ADSB In/Out transceiver and was quite pleased with its performance at that time. We had tested the unit in a Cessna 182 and in my Bonanza. Shortly after our tests, I received a phone call from the FAA’s ADS-B compliance person asking about what we were using in our aircraft, as if I did something wrong. His comment during the conversation was that he had observed an ADS-B “out” signal with our N numbers and wanted to follow up on the equipment we were testing.

A recent announcement from Skyguard TWX was that the FAA has certified their portable unit for use in experimental and light sport aircraft. In a recent FAA ruling on ADS-B out units, some changes were made in the rules to allow non-TSO’d ADS-B transceivers to be used in experimental and light sport aircraft, providing that they meet certain performance minimums and installation criteria. I have been talking with Don Houtz of Skyguard TWX, who has approval for his box based on its testing and performance data. I will cover more of the details in the next issue of Midwest Flyer Magazine. My hope is that this approval will carry over to many of our light production aircraft as well, and we can lower the cost of the ADS-B out 2020 mandate.

Winter has arrived in the Midwest. Fly safe.