Warning: This article has so many acronyms and contractions that you may begin to question your own sanity. Read at your own risk…

All kidding aside, being able to accurately decode field condition NOTAMs is an important winter survival skill for any Midwestern pilot. As we all know, snow, slush, and ice (which are referred to as contaminants) can have a dramatic effect on aircraft handling performance on the ground. 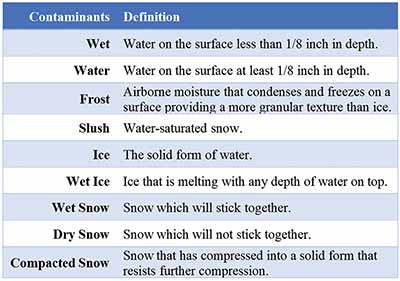 You might remember the accident involving a Southwest Airlines aircraft which overran the runway during a snowstorm at Midway International Airport back in 2005. One of the many initiatives following that accident was a reep0;/valuation of how field conditions were reported. In cooperation with members of the aviation industry, the Federal Aviation Administration (FAA) developed Takeoff and Landing Performance Assessment (TALPA) standards with a goal of improving the accuracy of runway condition reports.

Integral to TALPA, was the introduction of the Runway Condition Assessment Matrix (RCAM). Before RCAM, airport operators reported their observations and let the pilot conclude how they would affect their aircraft’s performance. For paved runways, the RCAM replaces this subjective judgement with an objective assessment that distils aircraft performance data, combined with runway contaminant types and depths, as well as braking action information, into a series of Runway Condition Codes (RwyCC). 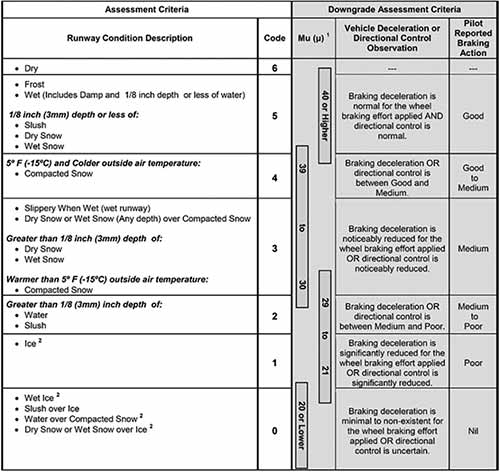 While this marks a significant evolution in how runway conditions are reported, the techniques used by airport operators to monitor field conditions, remain largely unchanged. You’ll still find airport personnel visually inspecting the field and obtaining Mu readings. In addition, pilots will continue to be asked for braking action reports; however, the terminology has changed. “Fair” has been replaced by “medium,” and intermediate reports, such as “good to medium,” are now accepted.

Although airport operators can publish a field condition (FICON) NOTAM by calling Flight Service, the FAA strongly recommends the use of their web-based application, “NOTAM Manager.” By using simple dropdown menus, NOTAM Manager will automatically generate the NOTAM sentence and the RwyCC based on the coverage, depth, and type of contaminant inputs.

Despite this automation, as a pilot or airport operator, it’s still important you have a basic understanding of the RCAM and how RwyCCs are determined.

To start, RwyCCs range from zero to six with zero representing the worst condition, and six representing the best possible condition. The RCAM lists 19 distinct runway surface conditions which combine type and depth of contaminant, as well as temperature. Each of these surface conditions is associated with a RwyCC, derived from years of aircraft performance data analysis. For example, ice on the runway would dictate a RwyCC of one, while 1/8-inch or less of slush would dictate a RwyCC of five. This process is repeated for each third of the runway, i.e. touchdown zone, midpoint zone, and rollout zone, culminating in a RwyCC series, such as 5/4/4. At times, additional information, such as braking action tests and pilot reports, may be used to downgrade or upgrade a runway beyond the initial RwyCC.

While a FICON NOTAM shares the same structure as other NOTAMs, a FICON NOTAM can be particularly difficult to decode. Several FICON examples can be found at the end of this article. As do other NOTAMs, FICON NOTAMs start with an exclamation point, followed by the accountability location, NOTAM number, location and keyword. (See the Dec 2017/Jan 2018 issue of Midwest Flyer Magazine for a review of these NOTAM elements).

Next, the affected surface is listed. A FICON for a runway will always list a single runway end, which indicates the direction in which the RwyCCs are reported. For example, “RWY 18 FICON 5/4/3” would signify that the touchdown third has a Rwy CC of five, while the rollout third is a three. If you plan on landing on the opposite runway, it is acceptable to simply reverse the RwyCCs. Of course, RwyCCs are only listed for runways. For other airfield surfaces, such as taxiways and aprons, pilots must rely on the description of the contaminants and braking action reports.

Following the affected surface, is the description of the conditions. In the interest of maximum clarity, the word “FICON” can be found at the beginning of this section. This makes a FICON a bit easier to identify when scrolling through a long list of NOTAMs. For runways, the description of the conditions starts with the RwyCC. Each zone of the runway is then described separately, delineated by commas, unless the condition is uniform across all zones. For all airfield surfaces, the condition description will, at a minimum, describe the type of contaminant. Depths may also be reported for certain types of contaminants. Below is a list of possible contaminants. It should be noted that contaminants can also be layered, such as “DRY SN OVER COMPACTED SN.”

During a snowstorm, airport operators may choose to focus snow removal operations on a portion of the runway, rather than the entire width. In these cases, the FICON will also describe the actions taken and the width (contracted as WID) treated. Most commonly you will see terms like PLOWED, SWEPT, SANDED, and DEICED (SOLID or LIQUID). Because of these snow removal operations, it may also be necessary for the airport to report the presence of berms, snowbanks, windrows, snow piles, and the conditions of the untreated pavement.

The final element of a FICON is the “observation time.” This is the time at which the airport observed the reported field conditions formatted as YYMMDDHHMM. Unfortunately, not all airports can be staffed and monitored 24/7. Therefore, following the most recent field condition report, you may also see notes like “CONDITIONS NOT MNT” accompanied by two dates/times. Commonly, this signifies the airport manager has gone home for the evening and will update the FICON when he or she returns. When the airport will be unattended for longer than a 24-hour period, “SFC CONDITIONS NOT REPORTED” may be used, along with the keyword “AD,” applying the notice to the entire airport.

For more information relating to TALPA, the RCAM, and field condition reporting, check out https://www.faa.gov/about/initiatives/talpa/.

Test Your Knowledge… Win A Prize!

Decipher the following FICON NOTAM excerpts into plain language for a chance to win a Camelbak water bottle from the Wisconsin Department of Transportation. Submit your answers to FlyWI@dot.wi.gov by February 28, 2018 for a chance to win. Five winners will be selected. One could be you!