As pilots, we have all heard or seen references to the FAA terms crew resource management (CRM), single pilot resource management (SRM) and aeronautical decision-making (ADM). These are terms that we do not use every day, but they are important, especially in “instrument” flying and when we go for a check-ride.

When I fly with an instrument-rated pilot, I observe the way they use all of their resources and how they prioritize tasks. In some cases, the training flight ends as part of the post flight discussion, or if needed, I interject some comments during the flight. Many of us have heard the expression “Aviate-Navigate-Communicate” and the five (5) T’s, both of which I will explain later in this article.

By definition, crew resource management or cockpit resource management (CRM) is a set of training procedures for use in environments where human error can have devastating effects. Used primarily for improving air safety, CRM focuses on interpersonal communication, leadership and decision making in the cockpit. We, as GA pilots, have to work harder to fly our aircraft because in most cases we are single pilots and the workload is the same or higher in some cases, and our cockpits are not as sophisticated as larger aircraft flown with two-pilot crews. On the other hand, some of our GA aircraft have cockpits that would put most airline cockpits to shame, but GA pilots seldom learn to use this modern equipment properly. So, enter single-pilot resource management (SRM), which is an adaptation of crew resource management (CRM) training for single-pilot operations. We, GA pilots, need to develop flow patterns and use acronyms to get things done in a logical and systematic order.

In the beginning of this article, I mentioned “Aviate – Navigate – Communicate.” Recently, during some flight training, I watched the pilot whom I was training get off course and deviate from his altitude while he fine-tuned the fuel flows on his engine analyzer. This was truly a case of not prioritizing tasks, and this is a very common mistake that has developed with the adaption of sophisticated engine analyzers. As we move into the future, we will see more aircraft equipped with full authority digital engine controls (FADEC) that set maximum engine performance. In the meantime, we need to set our priority on flying the airplane first.

After takeoff, I do a very rough job of leaning the mixture, and when the workload has reduced to almost zero, I fine tune my fuel flows using my engine analyzer.

It is important to have a well-organized cockpit, which is one of the strong points of a new aircraft, and which has been designed to help the pilot with fuel flows.

In the 1950s and up to the middle 1960s, aircraft manufacturers placed instruments wherever they fit. Then came what was known as the “T” style panel, which developed an improved instrument scan.

My 1966 Piper Cherokee was a good example of a pre-T style panel that made the instrument scan difficult. The pilot does eventually adapt, but transitioning to a different aircraft then becomes more difficult.

We often question why the airlines do not update their equipment, and the answer is that they want to keep all the airplanes the same so a pilot can fly any Boeing 737-300, for instance, as they are all the same. All switches are in the same place and all of the avionics are identical. Not so in our GA aircraft, except for the newer aircraft coming off the line. I never fly an aircraft in hard IFR until I become familiar with that specific aircraft. A Garmin 430 could have a different firmware update or a different interface to the CDI or autopilot than the last airplane I flew with the same equipment. Another case that may cause some confusion could be that the pilot who flew the aircraft previously changed some of the pilot option settings.

Besides knowing our aircraft and avionics well, there are other items we can do to enhance SRM.

We need to enhance our personal organization of the cockpit by the way it is designed and place items there. With the advent of the iPad and the fantastic software known as “ForeFlight,” we need to have the information in the pilot’s scan. 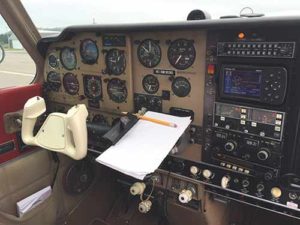 When I see the iPad sitting on the pilot’s knee, I know this flight may prove to be interesting during a hand-flown approach. Before the iPad, I purchased a chart holder that was in my scan (FIG-1), as I knew getting pertinent information and looking down at my knee would set me up for an unusual attitude if I had to hand fly the aircraft.

In a previous issue of Midwest Flyer Magazine, I wrote about acquiring and memorizing pertinent information from the approach chart and never looking at the chart once inside the final approach fix (FAF).

In the April/May 2018 issue, I wrote about copying and reading back clearances and how the brain is a computer with only a limited amount of processing power. I find that when there is too much information to process, the pilot gets overwhelmed and in trouble.

Several years ago, I was doing an instrument proficiency check (IPC) with a pilot who had too much information. There was the usual Garmin 530 navigator and a multi-function display (MFD), displaying a course overlay; a Garmin 796 with approach plate display; an iPad with ForeFlight and, of course, ForeFlight on the iPhone. It was a disaster to watch the pilot push buttons on all of these devices, and when two of the devices showed the aircraft in different locations, it would have been all over had we been in hard instrument meteorological conditions (IMC). We ended up turning off everything but the Garmin navigator which displayed the approach chart on the MFD and de-cluttered the primary flight display (PFD) to become an attitude indicator and HSI. The pilot learned a lesson and hand flew a perfect precision approach.

It is interesting as an instructor to watch pilots as they push buttons and twist knobs, and when I ask what information they are looking for, they do not have an answer.

The answer is to pick one or two screens that represent the most useful information and then custom design the pilot changeable fields to provide the information that is important.

A Garmin 530 has five (5) user programmable fields on the right side of the display on the Nav 2 page. I use waypoint, desired track, track, distance and groundspeed. You may prefer different fields to display or may prefer the Nav 1 page as your primary display, which has six (6) fields.

When it comes to checklists, I only use a written one on the ground and then only when not moving. This does not mean that I do not use in-flight checklists, but not written ones as a single pilot. I use acronyms and flow patterns as I feel it is too risky to bury my head to read a checklist when it is necessary to have my eyes outside looking for traffic. We must accept the fact that there are no electronic boxes that will alert you of a possible collision 100% of the time.

To get the greatest benefit from SRM, you also need a practical framework for application in day-to-day flying. One such approach involves regular evaluation of: Plan, Plane, Pilot, Passengers, and Programming. In this article, we have only scratched the surface on a few of these items, which I have found while instructing. You can use these items to evaluate your own shortcomings while flying.

Since I started writing this article, I had the opportunity to fly with several pilots and saw one of them duplicate the button-pushing scenario I described earlier. It seems as if there is a button to push or a knob to twist, we need to do it – a case of too much information available to us, and we have no idea what we are looking to find.

Today, we have so many more resources available to us while flying that would have only been a dream 25 years ago. We should use those resources to make better decisions before we fly and during the flight. This brings up another item to consider, and that is labeled “aeronautical decision-making” (ADM).

There is no one right answer in aeronautical decision-making. Each pilot is expected to analyze each situation in light of experience level, personal minimums, and current physical and mental readiness level, and make his own decision. As a flight instructor, I find that we cannot teach good decision-making in my opinion, which may be argued by some. I do say however, instructors can influence good decision-making to the pilots they fly with.

Till the next issue of Midwest Flyer Magazine, fly safe, fly often and stay out of those spring and summer thunderstorms!