138 miles, that’s how far all 194 public-use runways in Wisconsin would stretch if you lined them up end-to-end. The Wisconsin Department of Transportation (WisDOT) helps fund and administer runway reconstruction and rehabilitation projects for 159 of those runways. Preserving and maintaining the quality of runway pavement is critical to safe and efficient airport operations.

Laid end-to-end, the paved runways would stretch 107 miles, or the distance between Madison and Stevens Point, at a width of 97 feet. Keeping what amounts to 1,260 acres of pavement in good condition, means every summer you can expect to find a few airports impacted by runway closures for pavement improvements. As always, contact the local airport manager to find out if any projects are scheduled at the airports you frequent, and check NOTAMs before you go flying. 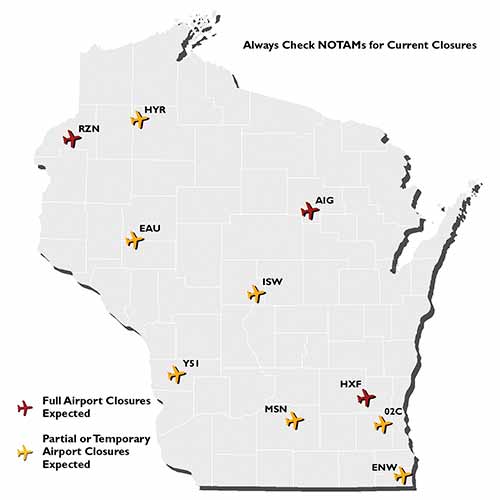 Platteville, Dodge County, Alexander Field, and Baraboo airports all got new runways last year. And, runway improvements were far from the only upgrades made at Wisconsin airports in 2018. Taxiway improvements were made at several airports including Rhinelander, Alexander Field, and Menomonie. Airfield lighting was replaced at Southern Wisconsin Regional Airport and a brand-new terminal was constructed at Shawano. New fuel systems also were installed at airports including Fort Atkinson, Richland Center, and Cumberland.

In total, WisDOT funded 62 different projects at 39 airports last year, not counting all the planning and design work for future projects.

Based on the current schedule, full airport closures are expected at Burnett County, Hartford and Langlade County airports due to major runway reconstruction projects. Projects at Alexander Field, Dane County, Chippewa Valley, Sawyer County, Viroqua, Capitol and Kenosha will also cause some occasional runway and taxiway closures this year. Be on the lookout for other temporary closures caused by minor pavement resurfacing and marking projects as well.

Other notable projects for 2019 include significant apron work at Green Bay, Sheboygan, and La Crosse; airfield lighting upgrades at Manitowoc; the construction of new airport maintenance buildings at Fond du Lac, and Clintonville; perimeter fencing at Lakeland; and a new terminal at Richland Center.

For more information on past and future airport development projects, including the Bureau of Aeronautics’ Five-Year Airport Improvement Program, visit the Wisconsin Department of Transportation website at wisconsindot.gov and type in “airport five-year plan” in the search bar or call 608-266-3351.