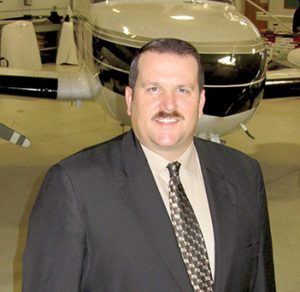 MADISON, WIS. – Aviation insurance agent, J. Jeffery Rasmussen, 49, of Merrimac, Wisconsin, passed away on March 29, 2020, following a short, but courageous battle with cancer. Rasmussen served as the president and partner of Aero Insurance, LLC, which is the aviation division within TRICOR Insurance. Rasmussen had 22 years of experience as a pilot and aviation insurance expert.

Jeff Rasmussen was born in Anchorage, Alaska to Jerry and Sandra (Fanning) Rasmussen on August 28, 1970, and grew up in Sparta, Wisconsin. A talented athlete in high school, he went on to play football for the University of Wisconsin Badgers from 1988-1992, earning a full scholarship as a walk-on. Rasmussen studied risk management and insurance at UW-Madison where he received his Master’s Degree. He was named not once, but twice to the Academic All Big 10 Team. In addition, he was inducted into the Sparta Sports Hall of Fame in 2001.

Rasmussen enjoyed flying with his father, and water sports with his wife Kristin, and son Jackson, 15, at their home on the Wisconsin River. Within his Merrimac, Wisconsin community, Rasmussen served on the village board.

Rasmussen was a gregarious individual, kind and hard-working, and always had a quick wit about himself. He loved to travel, hunt and was an avid Badgers, Packers, and Brewers fan.

Rasmussen’s family will hold a private celebration of life at a later date. Meanwhile, an education fund is being set up for the benefit of his son. Those interested in more details are encouraged to contact Dave Fritz at TRICOR Insurance. Email dfritz@tricorinsurance.com or call (608) 473-1045.

MaryLu Mecklenburg will continue to serve as account manager and the direct contact for the day-to-day aviation insurance needs of clients. She can be reached at (608) 352-6216 or via email at mmecklenburg@aero-ins.com.

Randy Peterson has been Jeff Rasmussen’s aviation insurance counterpart for many years as partner/vice president of Aero Insurance, and will continue meeting and advising clients. Peterson’s passion for aviation goes back 25-plus years. He holds glider, private and commercial pilot certificates, and instrument and multi-engine ratings. Randy Peterson can be reached at (608) 473-1110 or (608) 723-6441 x1103, or via email at rpeterson@tricorinsurance.com.

Aero Insurance and TRICOR Insurance are committed to continuing its high standards of service provided by Jeff Rasmussen and his team!