According to FAA Advisory Circular 150/5210-20A, “Each year, accidents, incidents, and runway incursions occur involving aircraft, pedestrians, ground vehicle drivers, and personnel taxiing or towing aircraft at airports. These accidents and incidents can lead to property damage, injuries, and even death.”

Most of us are accustomed to driving our vehicles on public roadways, with a thorough knowledge of the rules of the road and the operating expectations of ourselves and other drivers. However, when it comes to operating a vehicle on airport property, the “rules of the road” are different. There are hazards not normally found on a public roadway. Even signs and pavement markings are much different, which can be confusing for anyone not familiar with them.

For most people, driving a vehicle on an airport is far outside the normal scope of responsibilities or authorization. However, some of us who work at airports may need to venture out into what can be a very hazardous environment. Because of the potential hazard that we can create or be exposed to, we need to ensure that we have the proper authorization from the airport manager and/or Air Traffic Control (ATC) before operating on an airport.

The delineation between movement and non-movement areas may be indicated on the airport surface by the following boundary marking:

Operating a vehicle within the non-movement area, even though a clearance from ATC is not needed, requires the driver to exercise extreme caution and alertness as the apron may contain moving aircraft, pedestrians and other vehicles. Noise levels may be high which could make it more difficult to detect other vehicles and aircraft.

Never drive between safety cones or across passenger walkways. Watch cockpit blind spots—pilots typically cannot see behind or below the aircraft. Avoid jet blast or prop wash, which can blow debris or overturn vehicles. Be aware of, and avoid, all moving propellers which can cause damage, injury or death. Be aware of other vehicle movements – you may not hear them approaching due to aircraft engine noise. Yield to all aircraft, passengers, and emergency vehicles, which always have the right-of-way. Pay particular attention when aircraft beacons (flashing red or white) are illuminated, as that aircraft may have engines operating and may be moving or preparing to move.

The movement area contains signage which can be difficult to understand. At airports with an operating control tower, a clearance from ATC is necessary. If operating in the movement area at a non-towered airport or at a tower-controlled airport when the tower is closed, it is necessary to self-announce location and intentions on the Common Traffic Advisory Frequency (CTAF).

Vehicles which operate in the movement area should be marked with flashing lights or flagged for high daytime visibility and lighted for night operations. Vehicles must be equipped with an appropriate radio for transmitting and receiving on the airport’s frequencies. The radio frequencies need to be monitored at all times, which means if a driver must get out of a vehicle, an external speaker or a handheld radio will also be needed. High visibility clothing—such as a vest and cap—need to be worn when outside of the vehicle. Hearing protection is always a good idea, along with any other personal protective equipment or other items required by your employer or the airport operator.

Taxiways are used by aircraft to move between the aprons and the runways. Taxiways are designated by a letter or a letter-number combination such as A, C, B4. Taxiways are typically edged by blue lights or blue reflectors. At hard-surfaced airports, taxiways also have a painted yellow center stripe. Unlike a roadway where the centerline divides the road into two lanes, a taxiway is a single-lane surface – aircraft are expected to taxi on the centerline. Keep in mind that airplanes cannot backup. While driving on a taxiway, if a vehicle approaches an airplane head on, the vehicle will need to safely get off the taxiway by pulling over into the grass or turning around and exiting the taxiway.

A taxiway location sign may be located alongside a taxiway and will display the taxiway designation with yellow letters on a black background. For example: 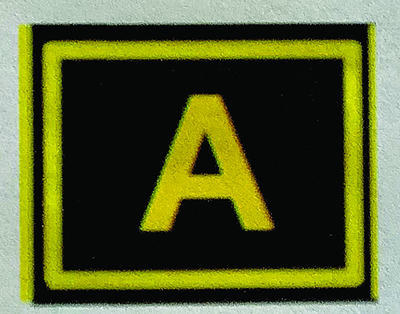 Directional signs use black letters on a yellow background. Directional signs point to the direction of the indicated taxiway or runway. For example, at this sign, if you turn right, you will be on taxiway Delta: 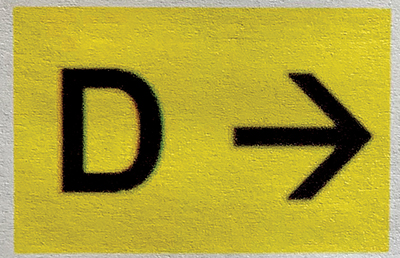 While operating on the movement area of an airport, it is critical to avoid entering the runway inadvertently, resulting in a runway incursion. Always maintain situational awareness and know where runways – and their boundaries – are located.

Runway holding signs are red – think of them as a stop sign on the road. Never pass the holding sign unless you are given a clearance to do so at a tower-controlled airport. Here is an example of a holding sign for runway 15/33:

Runway areas may also be indicated by a runway holding position marking, painted on the pavement. Never cross from the solid line side to the dashed line side until a clearance is received at tower-controlled airports or until the area is clear and a radio call has been made at non-towered airports:

If you need to drive on the runway, it is best to drive with the direction of the wind. Aircraft takeoff and land into the wind. Driving in the opposite direction of arriving or departing aircraft will provide the best opportunity to spot them. If it is necessary to cross a runway, do so at the end of the runway instead of the middle as this will give aircraft the best chance to see you if you failed to see them.

While operating a vehicle on an airport surface, it is of utmost importance to do so in a safe manner. A runway incursion creates an enormous hazard.

A runway incursion is defined as “any occurrence at an aerodrome involving the incorrect presence of an aircraft, vehicle or person on the protected area of a surface designated for the landing and takeoff of aircraft,” according to FAA AC 150/5210-20A. In other words, something is on the runway that is not authorized to be there.

Runway incursions are primarily caused by an error in one or more of the following areas: communication failure, airport unfamiliarity, loss of situational awareness or not using a current airport diagram.

Here are a few quick suggestions to help prevent a runway incursion while operating a vehicle on the airport:

Communicate. If at a tower-controlled airport, get a clearance before entering movement areas and don’t assume you know which taxiway route ATC is going to assign you. If at a non-towered airport, self-announce on the CTAF before entering movement areas. Remember that pilots are not required to talk on the radio at a non-towered airport, so establish and maintain a good scan for aircraft with your eyes. Pilots will oftentimes activate the runway lights before they takeoff or land (even during the day). Exit the runway and look for approaching aircraft if the runway lights turn on.

Be familiar with your airport. Have an understanding of the taxiway designations and the most common routes aircraft are using to get to and from the runway. If you are unfamiliar, get an escort from someone who is familiar with the airport.

Maintain situational awareness. Study your airport’s taxiway diagram and have it close by when moving on the airport. Always know where the runways are located, and don’t allow yourself to inadvertently enter a runway.

Safety professionals believe nearly all safety incidents are avoidable. Ultimately, it is up to every one of us who operate at an airport to keep ourselves and others safe. Knowing the “rules of the road” when operating a vehicle on an airport surface is a good place to start. The full set of guidelines can be found online in FAA Advisory Circular 150/5210-20A.