Go-Around. Ready or Not?

Do you recall the last time you performed a go-around? Are go-arounds something you practice on a regular basis? Are you prepared to go-around with every lap in the traffic pattern and every instrument approach, or is your mind set on landing no matter what happens?

As pilots we know that landing can be the most fun, challenging, and rewarding part of the flight. Have you noticed how passengers tend to judge the whole flight by the landing? Maybe you have had the experience, as I have, of flying on a gorgeous, smooth-air day when everything en route went perfectly, but regrettably the landing was a bit rougher than you wanted it to be. What do your passengers think? They may not say it, but your skills as a pilot are brought into question. Suddenly we find ourselves explaining to our passengers what happened, and we try to justify our less-than-ideal landing. We may say something we hope will sound like a good excuse, such as “That ground effect just wasn’t working very well today,” or “I think we hit wake turbulence from that light sport aircraft that landed 10 minutes ago.”

Perhaps, on the other hand, you’ve had a flight that is not pretty. The turbulence made for a choppy ride. You were a bit rough with the control inputs. You were close to busting an altitude, but with that zero G push over, you saved it. You are concerned the passengers may never want to fly with you again. However, when it comes time to land, you grease it in. Your passengers are more than impressed and think you are a super pilot. “Wow! That was the smoothest landing I’ve ever felt. I didn’t even know we were on the ground. Good job captain!”

Have you had the experience of deplaning an airline flight as a passenger? Frequently one of the pilots is standing by the exit saying farewell to the passengers. Have you noticed what accolades the passengers give to the pilot? It’s often, “Nice landing” or “Thanks for the smooth landing.” Most likely a passenger has never said to an airline pilot, “You know, that takeoff back in Minneapolis was superb. It really felt like the thrust was added symmetrically and your rudder control was exquisite. Rotation was nice and smooth, too. In fact, I didn’t even know we were in the air.” Of course, that doesn’t happen. The landing is what gets the passengers’ attention. Maybe this is a reason why we as pilots can be so committed to landing that we really don’t want to entertain the option of a go-around. After all, we are task-oriented, goal-achieving, problem-solving, I-can-salvage-this-approach type of people.

I regularly read accident reports as part of my job. Recently I did a search of aircraft accidents that occurred in my home state over the past three years. On par with statistics, there were numerous reports involving landing accidents. Specifically, the results showed 25 landing accident reports. Of these 25 reports, 10 were the result of the pilot trying to salvage a bounced landing or performing an improper go-around technique. Let that sink in. About 40 percent of those landing accidents could have been avoided with a well-executed go-around.

As pilots, we know we are supposed to perform a go-around any time our approach becomes unstable. According to the FAA’s Stabilized Approach and Landing Fact Sheet, “A stabilized approach is one in which the pilot establishes and maintains a constant angle glidepath towards a predetermined point on the landing runway” (https://www.faa.gov/news/safety_briefing/2018/media/SE_Topic_18-09.pdf). The minimum altitude at which to be stabilized is 1,000 feet above ground level (AGL) in instrument conditions and 500 feet AGL in visual conditions. If an approach becomes unstable below 1,000 feet AGL in instrument conditions or 500 feet AGL in visual conditions, a go-around is necessary.

The idea of performing a go-around when an approach becomes unstable is basic Pilot 101 knowledge. However, following through with that knowledge is an entirely different matter. If we are honest, we can probably all admit we have made a landing after a situation which warranted a go-around. Have you ever been on short final and needed to maneuver aggressively to miss a flock of birds? Have you ever been significantly high on final and determined that chopping the power and adding more flaps was the proper solution? What about overshooting the base to short final turn? We have all made these mistakes. It seems we can become so focused on landing and accomplishing that particular task that we may neglect the approach. 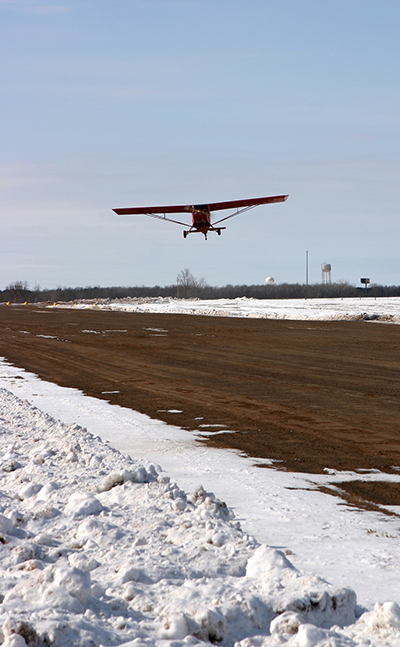 Challenge yourself to fly stabilized approaches. Correct speed, proper alignment with the runway, and good glidepath control are some benchmarks for a stabilized approach. For example, know the proper approach speeds for your airplane based on configuration, and set parameters for when you will execute a go-around. The parameter for approach speed in the Private Pilot Airman Certification Standards (ACS) is +10/-5 knots. Discipline yourself to go-around if you see an airspeed 10 knots greater or 5 knots lower than your desired approach speed.

Make go-arounds part of your regular proficiency flights. Go-arounds become more challenging as speed slows and altitude gets lower. Find a Certified Flight Instructor who will help you practice go-arounds from a high-drag, low-speed scenario.

Be mindful that unstable approaches are not the only reason to go-around. There can be obstructions on the runway at any time. Deer, coyotes, geese and seagulls are all common visitors at airports. Oftentimes these animals are difficult to detect until the aircraft is very close to the runway.

Other pilots can create a go-around situation too. Perhaps the aircraft you are following in the pattern takes more time on the runway than you were anticipating, and as you are on short final, that aircraft is still on the runway. Or maybe the pilot holding at the end of the runway doesn’t see you on short final and decides to enter the runway.

Mentally review your go-around procedure (power, attitude and configuration) before entering the traffic pattern. Keep in mind that a go-around may be necessary at any time. If you find yourself wondering, “Should I go around,” you should probably go-around. In a powered airplane with an operating motor, there are very few landings you must be committed to.

Take some time to read Chapter Eight of the Airplane Flying Handbook as a refresher on stabilized approaches and go-arounds. It can be accessed free on the FAA’s website (faa.gov).

By making go-arounds a part of your regular proficiency flights, you will be ready when the need to go-around arises.