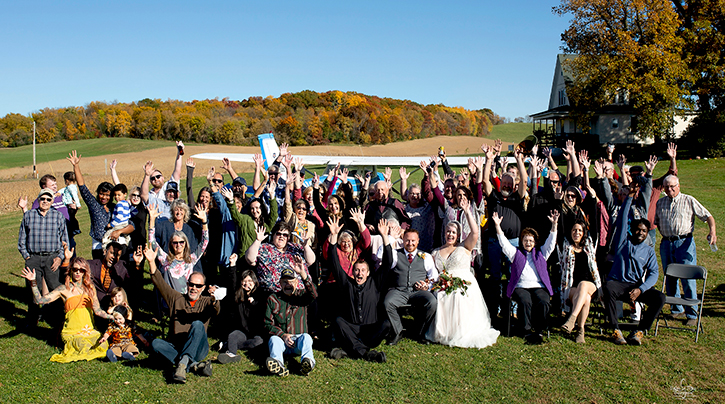 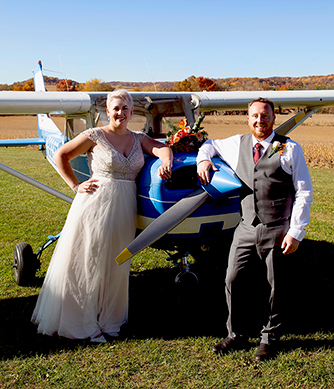 Brandon Bielefeldt and Ivy Lannigan were married October 10th, 2020 in a very unique and special way by flying to their wedding. Bielefeldt owns a 1968 Cessna 150 Commuter and the couple thought it would be an awesome way to arrive at their wedding which occurred on a beautiful fall day at the groom’s parents’ farm in Gilmanton, Wisconsin, where they have an airstrip called “The Farm Airport.”

The couple took off from Doug Ward’s Log Cabin Airport in Mondovi, Wisconsin. Ward was a highly decorated belly-gunner on a B-17 Flying Fortress during World War II and is featured in the book “Turret Tales” by Judith Ohm (judith.ohm@ntec.net). Ward passed away in 2018, but before he died, he helped mentor Bielefeldt to get into flying and helped him buy his airplane in 2017. Bielefeldt received his private pilot certificate when he was 17 years old.

Brandon and Ivy gave their guests a mini airshow before landing and the ceremony took place right next to the airstrip.

Brandon is a semi-truck driver with Winfield United and Ivy is a registered nurse through Hiawatha Homecare. Brandon’s goal is to build more flight time and obtain additional ratings. Ivy will continue her education to become a nurse practitioner.