Flying cross country? Trying to cover a bit of ground? Need to get somewhere fast? On a budget? Take the airplane.

Want to go sightseeing? Low and slow desired? Doorless? And land on cool spots? Have a little extra cash to burn? Let’s take the “Air Jeep,” aka the helicopter.

After a month in Montana and a few days in Yellowstone and Grand Teton National Parks, we spent another month in Utah this fall with the motorhome. 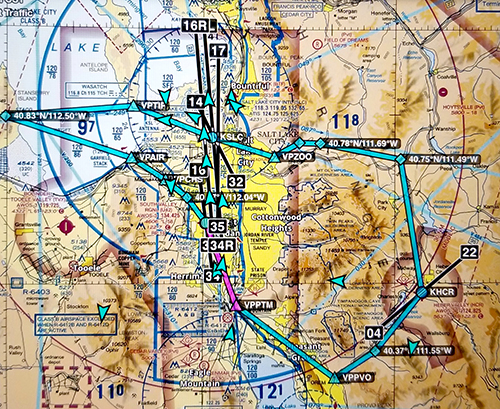 We started out flying southeast towards the Point of the Mountain VFR checkpoint (VPPTM), but remained west of it as hang-gliders and paragliders love to fly from it. Source: ForeFlight

We have gotten to know Utah pretty well over the years, but we still can’t get enough of it. Funny enough… our Utah bucket list continues to grow instead of shrink. 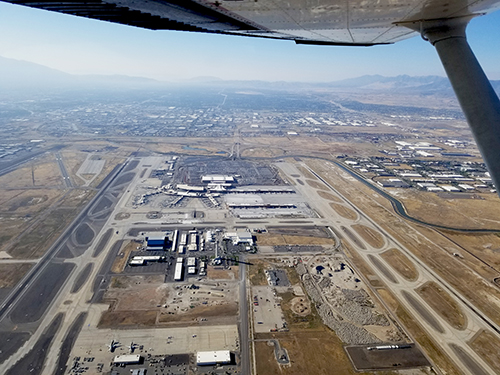 I managed to fly four times this time around, two of which were around the Salt Lake City (SLC) area: the first time in an airplane and the second time in a helicopter because there are different aircraft for different missions.

Flying the airplane first gave me a great overview of SLC and its surrounding suburbs, towns and, more importantly, mountains and outdoor areas. It also allowed me to pinpoint a few areas to fly with the helicopter later: slower, lower, closer.

We started out flying southeast towards the Point of the Mountain VFR checkpoint (VPPTM), but remained west of it as hang-gliders and paragliders love to fly from it.

What I like most about the greater SLC area is that there are mountains both east and west of the valley (unlike in Denver, for example, where there are only mountains west of the city). However, having two significant bodies of water (Utah Lake by Provo and the Great Salt Lake in SLC) makes it easy to get your bearings correct.

We then followed Provo Canyon, crossing the Wasatch Mountains, from about VFR checkpoint VPPVO to Heber Valley Airport (KHCR) over Deer Creek Reservoir. I chose to hug the right side of the canyon this time to enjoy views of Mount Timpanogos and have “my out” on my side of the airplane in case we encountered any troubles.

According to the locals, the leaf colors started to change early this year and I sure appreciated it. I guess not all is bad in 2020. 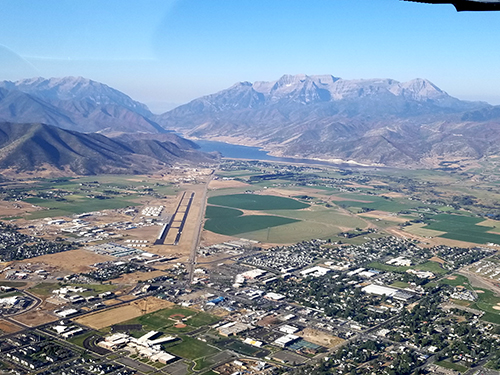 I did not land in Heber City. It did not look like a challenging airport to fly in and out of. However, it did look nice, so we’ll plan on spending some time in the area with the motorhome during a future trip, so we can explore Strawberry Reservoir, the Timber Lakes, and the surrounding mountains as well.

And, from Heber City to Park City via Jordanelle Reservoir, a popular place for boaters and fellow RVers. Of course, we got to see a few ski resorts and the Utah Olympic Park as well. 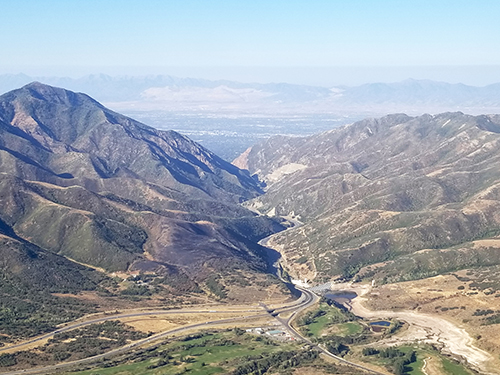 On the way back towards SLC, instead of taking Parley’s Canyon (since I’ve seen it from the ground multiple times), I took the next canyon north to see Hogle Zoo (VFR checkpoint VPZOO).

That put us right in the middle of downtown SLC and then ATC had me fly over the north end of KSLC, to Antelope Island. It’s always pretty cool to fly over big airports and see aircraft coming and going.

The flight back was uneventful, with a short-field type landing at South Valley Regional Airport (U42). 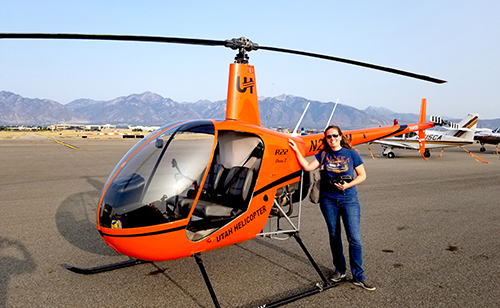 To be able to see the fall colors a bit better, and because I always enjoy landing off-airport (especially in areas with terrain and elevation), the helicopter flight focused around just that. Plus, I had time to do some fun hover maneuvers once back at U42.

The two flights were on different days. One of my personal minimums is: Don’t fly both aircraft types on the same day! 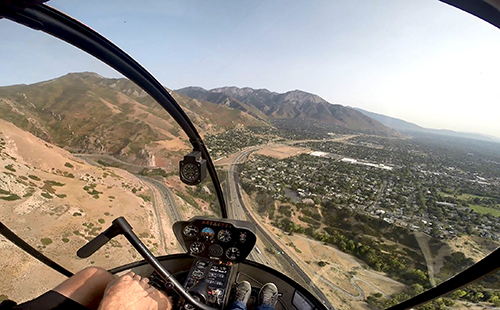 Flying the Robinson R22 helicopter around the foothills of the Wasatch Mountains.

I first flew towards downtown SLC with the idea of flying around the University of Utah and then heading south along the foothills of the Wasatch Mountains.

The fall colors were, certainly, much better seen from the helicopter. I also got to see a house with Louisiana’s official symbol (a fleur de lis) in the landscaping, graffiti, a few mansions, and some other cool features on the side of the mountains.

Utah Helicopter has permission to operate in and out of a private property close to one of the canyons, so we stopped in there as well. Off-airport landings are usually my highlight of heli flying and this time was no exception!

Being dual rated is the most fun one can have. Best of both worlds!

EDITOR’S NOTE: Yasmina Platt has been with the international airport planning and development consulting firm AECOM since 2016. She also writes an aviation travel blog called “Air Trails” (www.airtrails.weebly.com), in addition to articles on pilot destinations for Midwest Flyer Magazine. Pilots can locate articles Yasmina has written by going to www.MidwestFlyer.com and typing in her name in the search box.