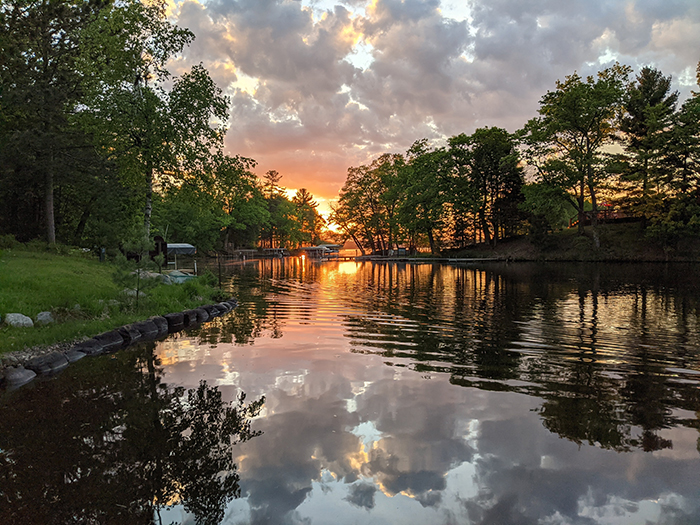 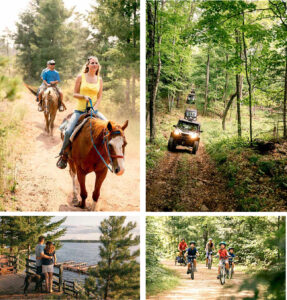 I’ve been flying to Eagle River ever since local and international businessman, Ray Rubin, stopped by the airport one day in 1988 and picked up a copy of Midwest Flyer Magazine. After reading the magazine, he gave us a call, and bought an advertisement to promote a Canada fishing resort he built in partnership with Al Reed of Winnipeg, Manitoba. As soon as the airstrip was in, Ray and I flew up to the resort, while the resort was still under construction. Once finished, the resort was rated five stars! That was the start of the annual Canada Fishing Fly-Out we promote each year, now at Miminiska Lodge in northern Ontario (CPS5).

Eagle River was the site of the first permanent Indian settlement in the Wisconsin Northwood’s, located on the shores of Watersmeet Lake where the Wisconsin River and Chain of Lakes meet. These early Indians were called Old Copper Indians and were succeeded by the Woodland Indians from 2,600 B.C. to 800 A.D. They are believed to be the ancestors of the Chippewa, Potawatomi and Menominee. Settlers started coming to the area in 1857. Logging and fur trading were the dominant trades. It wasn’t until 1925 with the development of the automobile that the resort industry began to grow.

At its peak, there were 1,600 residents in Eagle River. The current population is 1,431. The city’s name was derived from the abundance of eagles nesting along the river.

Eagle River has retained its small, northern Wisconsin appeal, but gone are the days of the “ma and pa” resorts that rented little cabins with outhouses, which have since been sold to individuals who made improvements and formed condominium associations. Today, resorts are modern, and many privately-owned cabins have been replaced with glorious lake homes, most of which are weekend getaways!

My idea of an ideal vacation is to fly into Eagle River Union Airport (KEGV), rent a car and drive over to one of the marinas, such as Boat Sport Marina, (https://www.boatsport.com/), and rent a boat, then boat on over to a resort, such as the Chanticleer Inn (http://www.chanticleerinn.com/). 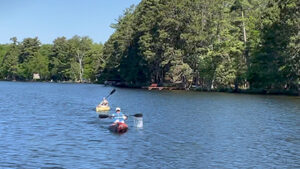 The Chanticleer Inn, where our family has stayed many times, dates back to 1922, with the Alward family purchasing the property in 1951, which now consists of 30 acres. In January 1964, the Alwards pioneered the first World Championship Snowmobile Derby on nearby Dollar Lake, which two years later moved to the permanent derby site near the airport on Highway 45 North. Today, Dollar Lake is the location for the annual Labatt Blue USA Adult Pond Hockey Tournament. Thirty (30) hockey rinks dot the 107-acre lake for the three-day event that attracts 2,000 participants and spectators. As many as 300 teams from across the country participate on adult male, female and co-ed teams. The players range in age from 18 to 70-plus!

During our stay this summer, we found Dollar Lake wonderful for swimming and kayaking, and aside from one fisherman we saw one day, and a mom and her three toddlers another day, we had the lake all to ourselves.

Owners Jake and Sue Alward live in a private residence adjoining the Chanticleer property and were very accommodating. In fact, Jake himself rented us the kayaks. 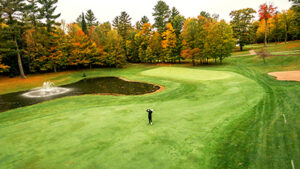 Photo Courtesy of the Eagle River Chamber of Commerce.

Besides boating, fishing and water skiing, golfing is a popular sport in Eagle River, and one of the best golf courses in the area is Lake Forest Golf Course. It features nine (9) holes and 2819 yards from the longest tees for a par of 36. The course rating is 33.8 and it has a slope rating of 115. Best of all, the course is open to the public (http://www.lakeforest-golfclub.com).

Lake Forest Golf Course was originally called Eagle Waters Golf Club. In 1917, a small group of wealthy regulars started a private club open to only an elite group of cottage owners and their guests. Many famous people golfed there, with President Dwight D. Eisenhower being a frequent visitor in the 1950s. The 210-acre club was sold in 1963 and built in its place was Lake Forest Resort and Club, Wisconsin’s first successful timeshare resort. Lake Forest Resort has condominiums for rent, and yes, we’ve stayed there as well (www.lakeforestresort.com).

Like all vacation destinations following the pandemic, Eagle River is playing catchup with people again going on vacations and dining out at restaurants, so you need to book well in advance for accommodations, and the earlier you can go out for lunch and dinner, the better!

Upon Ray’s recommendation, we dined at the Kickback Grill (https://kickbackgrilleagleriver.com) on beautiful Duck Lake, once by car and once by boat. A well-maintained pier makes boating to the restaurant very enjoyable. Dining indoors and on the patio is available.

Since the uniqueness of Eagle River is its chain of lakes, a great pastime is to boat the chain from Eagle River to Three Lakes, Wisconsin, which takes a full day roundtrip. However, Three Lakes Municipal Airport (40D) has a 3400 X 120 ft grass airstrip (Rwy 03/21) on the east end of town, so you can fly there as well. The Sunset Grill and C-Store, and Jake’s Bar and Grill, are located a half-mile from the northeast end of the airport. Check with your ForeFlight app or the Wisconsin Airport Directory and Pilot’s Guide for additional information.

We also enjoy boating around at 5-10 kts looking at the beautiful homes and historic boat houses. Over the years, we’ve also done our share of waterskiing with our kids. Now it’s time to teach our grandchildren.

This region of Wisconsin has a lot of aviation history. Jack Vilas, for whom the county is named after, was one of the first people to have a commercial aircraft operation. 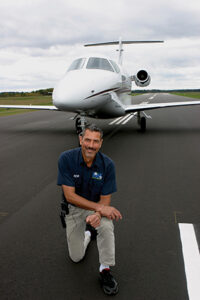 Eagle River Union Airport was built in the 1930s and the runway orientation that exists today is from the mid-1970s. The airport is operated by the City of Eagle River, Town of Lincoln and Town of Washington. The airport features a separate helipad for medevacs and a Civil Air Patrol squadron is located on the field.

When you fly to Eagle River, you will be greeted by airport manager, Rob Hom, and his staff. Full and self-service fuel is available (100LL and JET A), as well as courtesy cars and bicycles for quick trips to town for breakfast, lunch or dinner, and car rental for longer stays.

One fall while flying home from the Upper Michigan Peninsula, we diverted to Eagle River because of weather, and was able to rent a car on short notice. But this is not always possible, especially during the summer. So, if you plan to vacation in Eagle River, it’s best to call ahead to reserve a car.

AVIS is located on the field, featuring midsize, SUVs and minivans. The airport also has heated hangar space, as it does get cold up there come winter.

Rob Hom was born and raised in St. Catharines, Ontario, which is near Niagara Falls. He attended Confederation College of Applied Arts and Technology in Thunder Bay, where he received his Commercial Pilot Certificate, Seaplane Rating and a degree in Aviation (Flight) Management.

After graduating, Rob flew for Weagamow Air in Weagamow (Round Lake), Ontario; Central Air Transport in Sioux Lookout, Ontario; and Lac La Croix Quetico Flying Service out of Crane Lake, Minnesota and Lac La Croix, Ontario from 1983 to 1992. He flew de Havilland Beavers, Otters, Cessna 180s/185s and an Aeronca Champ – all on straight floats in the summer, and skis in the winter. That’s when Rob met his American wife, Katie, and they moved to Garrison, Minnesota in 1992, where Katie accepted a position as a veterinarian and Rob changed careers, serving as an assistant manager at Mille Lacs Golf Resort. They moved to Ashland, Wisconsin in 1998 to be closer to family. Rob began his career in airport management at John F. Kennedy Memorial Airport in Ashland in 2000 and was appointed manager at Eagle River Union Airport in 2009. Rob and Katie have a daughter and two sons.

In his freetime, if Rob isn’t flying his 1946 Taylorcraft BC12D, he is either making pottery or playing soccer and coaching the local high school soccer team.

Eagle River Union Airport features a 5000 ft hard surface runway (04/22) with RNAV (GPS), LOC/DME, and VOR/DME approaches, and a 3400 ft crosswind runway (13/31). The airport accommodates all GA aircraft, including large corporate jets. It is not uncommon to see a half-dozen or more jets parked on the north ramp on a busy weekend, some with passengers from as far away as the West Coast. Ample parking is available in front of the terminal building for small GA aircraft.

The modern, but rustic-looking terminal building has a conference room, ice and vending machines, pilot lounge with Direct TV, a flight planning room, and free wi-fi and internet access. If after visiting Eagle River you fall in love with the community and want to spend more time there, the airport has vacant land available for hangar development, and there’s plenty of real estate companies to choose from.

For a complete listing of all airport services, visit www.erairport.com or call Rob Hom at 715-479-7442 or email fbo@erairport.com.

Besides its first-class airport, Eagle River is home to Eagle Fuel Cells (https://www.eaglefuelcells.com/), which is owned and operated by Kurt Hartwig. The Hartwig family consists of longtime pilots and residents of Eagle River, and Kurt, his dad, Carl, and son, Andrew, 17, are pilots and EAA members. In fact, Carl and his brother, Albert, were among only 150 people who attended the first EAA Fly-In at Milwaukee Timmerman Airport in 1953. Andrew is the current Cadet Commander for the Eagle River Civil Air Patrol Chapter and will be attending EAA AirVenture this year as a Blue Beret. Kurt served on the Eagle River Union Airport Commission for 10 years during the airport’s growth years, and as chairman during his final four years.

Whether you are looking for fuel cell maintenance and inspection tips, overhaul and replacement options, or researching the historic and technical background of aircraft fuel cells, you will find it at Eagle Fuel Cells. For assistance, call 800-437-8732, 715-891-0524 (Cell) or email: kurt@eaglefuelcells.com. Eagle Fuel Cells exhibits at EAA AirVenture Oshkosh, so you can find them there as well.

To learn more about Eagle River, Wisconsin, go to https://eagleriver.org/.