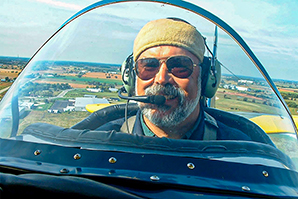 Douglas Conciatu, EAA Lifetime 53419, of Macomb, Michigan, has received the 2021 Phillips 66 Aviation EAA Young Eagles Leadership Award. The award recognizes outstanding Young Eagles volunteers who have supported the future of aviation by going above and beyond the basic Young Eagles flight. 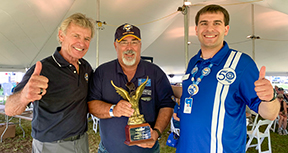 For nearly 30 years, Conciatu has been an active member of EAA, flying Young Eagles every year, mostly from his home airport in Ray, Michigan. He ranks ninth among Young Eagles pilots across the organization and has flown more than 2,400 young people. He has also been an EAA AirVenture Oshkosh volunteer at the Blue Barn, and in past years, volunteered to fly Young Eagles at EAA Pioneer Field in Oshkosh during the summer months.

Conciatu never thought flying would become a lifelong passion. A self-starter, he began his interest in aviation in high school by reading industry magazines and learning as much as he could about it. At the age of 16, he achieved his first solo flight and received his pilot certificate at age 17.

Although piloting was never his full-time career, Conciatu found time to fly as much as he could, while maintaining his day job in public safety before he retired. In addition to being a Young Eagles pilot, he is an independent flight instructor at Ray Community Airport (57D) in Ray, Michigan.

“One summer, I gave a boy a Young Eagles ride at Pioneer, and years later, he found me at Oshkosh to share that he was enrolled at the University of North Dakota, studying aviation. It’s stories like this that make what I do with the Young Eagles and EAA so incredibly special. That feeling you get when you’ve impacted someone’s life is unmatched, and I’m very grateful to continue what I love and guide younger generations so they, too, can find a passion for flight.”

Not only does Douglas Conciatu have a love for aviation, but his wife, Marla Smith, EAA Lifetime 739104, is also actively involved with Young Eagles. Although she is not a pilot, she has volunteered with the ground crews at the Young Eagles rallies and coordinated rides alongside her husband. She and Douglas, in fact, met at AirVenture 13 years ago and enjoy coming back to Oshkosh every summer.

Douglas Conciatu is a member of EAA Chapter 13 in Ray, Michigan, and Chapter 252 in Oshkosh.