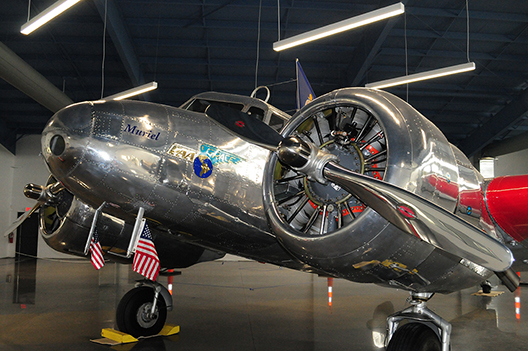 This Lockheed Electra 10-E airplane, one of only 14 ever built, is identical to the aircraft Earhart flew on her fateful flight in an attempt to become the first woman to circumnavigate the world. The aircraft is named “Muriel” after Amelia Earhart’s younger sister, Grace Muriel Earhart Morrissey.

The star attraction of the Amelia Earhart Hangar Museum, located at Atchison Amelia Earhart Memorial Airport (K59), is the last surviving Lockheed Electra 10-E airplane, one of only 14 ever built. The aircraft is identical to the aircraft Earhart flew on her fateful flight in an attempt to be the first woman to circumnavigate the world. The aircraft is named “Muriel” after Earhart’s younger sister, Grace Muriel Earhart Morrissey. 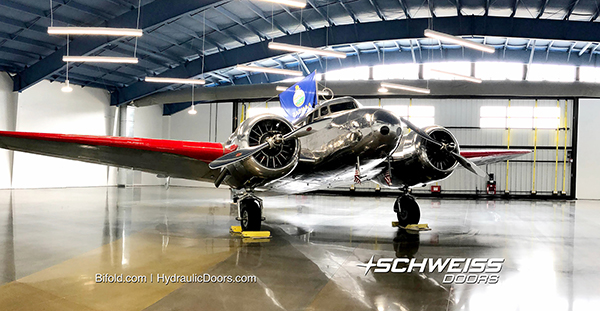 The new multi-purpose hangar not only serves as a museum, but as an airport terminal and community gathering place. The 16,800 square foot building, designed and built by Al J. Mueller Construction of St. Joseph, Missouri (http://aljmueller.com/), is a pre-engineered metal hangar of the 1920-30s era. It includes the museum, hangar space, viewing mezzanine, lobby, storage/prep bay, offices, pilots’ lounge, and conference and community room. The hangar features a large Schweiss bifold liftstrap door with three large windows to provide natural lighting (www.bifold.com). The door measures 69 feet, 4 inches wide by 19 feet, 7 inches tall, so it is perfect for large deliveries and is easy to operate, according to museum officials. The door was installed by DH Pace Company of Olathe, Kansas (www.dhpace.com).

The Amelia Earhart Hangar Museum will educate, inspire, and empower all generations in their pursuit of flight.

After years of dreaming and planning, the Amelia Earhart Hangar Museum should be completed by spring 2022. While there are exhibits yet to be displayed, the museum is now open for tours by appointment. To schedule an appointment call 314-753-8312 during regular business hours, 9:00 a.m. to 5:00 p.m., Monday through Friday. The cost is $10 for adults and $6 for children. A gift shop is open during tours (https://ameliaearharthangarmuseum.org/). 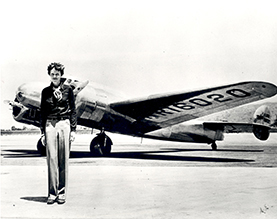 The international organization of licensed women pilots, the Ninety-Nines of which Amelia Earhart was its first president, owns and manages the Amelia Earhart Birthplace Museum in Atchison, Kansas. In 1984, the organization began fully restoring the 1861 Victorian structure where Earhart was born. The home was designated a national historic site in 1971.

In addition to the hangar museum, Amelia Earhart’s childhood home is historic and filled with the mystery of the aviator. The house was built in 1861 in a Gothic Revival style and is on a bluff overlooking the Missouri River. Earhart was born in this house on July 24, 1897. For additional information, call the “Amelia Earhart Birthplace Museum” at 913-367-4217 (www.ameliaearhartmuseum.org).

After completing several historic flights, including flying solo across the Atlantic Ocean, May 20-21, 1932, Amelia Earhart embarked on the most challenging flight of her career in an attempt to circumnavigate the world. On July 2, 1937 Earhart and her navigator, Fred Noonan, took off from Lae, New Guinea bound for Howland Island in the Pacific Ocean to get fuel and were never seen again. Earhart was just three weeks shy of her 40th birthday when they supposedly ran out of fuel, three-fourths of the way to Howland Island.
Three theories still abound to this day regarding Earhart and Noonan’s disappearance. One theory is that Earhart crashed at sea due to technical difficulties or the inability to locate the small island. According to experts, the charts used by Earhart and Noonan placed Howland Island nearly six miles off its actual position. The second theory is that Earhart accidentally landed in the Central Pacific that was, at the time, controlled by the Japanese Navy. The third theory is that Earhart landed on an uninhabited island and may have survived, but never rescued.