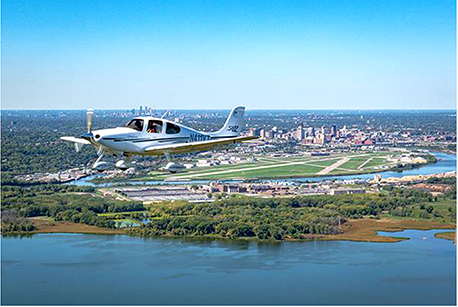 A Cirrus SR22 flys by St. Paul Downtown Airport (KSTP), one of six reliever airports to Minneapolis-Saint Paul International Airport (KMSP). The reliever airports operated by the Metropolitan Airports Commission (MAC) had an increase of 8% in total operations in 2021 over 2020. (MAC Photo)

MINNEAPOLIS-ST. PAUL – The six general aviation airports operated by the Metropolitan Airports Commission (MAC) grew their operations in 2021 by 8% collectively—an increase to 352,195, or 26,151 more takeoffs and landings compared to 2020.

“The strong demand for our general aviation system did not wane over the past year,” said Brian Ryks, CEO of the MAC. “Our general aviation airport system overall has seen double-digit growth in operations from 2019 to 2021, and the total number of aircraft based at our six reliever airports has held steady at more than 1,300. The amount of flight training occurring at our airports is very promising as airlines look to backfill large numbers of vacancies due to pilot retirements and focus on continued growth in demand.”

The MAC’s general aviation airports are referred to as “reliever airports” within the Twin Cities metropolitan area because they relieve congestion that would otherwise impact Minneapolis-Saint Paul International Airport (MSP), which had 303,850 total operations in 2021, a 24% increase over 2020.

Despite the pandemic, MAC reliever airports in 2021 continued to build on the momentum from 2020, when the reliever system posted 2% growth over 2019 activity levels.

St. Paul Downtown Airport (STP) and Airlake Airport (LVN) located in Lakeville, MN, saw the largest increases in total operations in 2021. Takeoffs and landings at STP, which serves more corporate activity than other reliever airports, increased by 29.8%, or more than 9,000 additional operations over 2020. At LVN, which serves primarily leisure flying and flight training, activity increased by 15.8%, or nearly 5,000 more operations in 2021 than 2020.

The only reliever airport to see a decrease in operations in 2021 was Crystal Airport (MIC), located northwest of Minneapolis, where takeoffs and landings dropped by 4.2%, or around 1,600 operations.

Continued investments at MAC’s reliever airports are planned for 2022. Major improvements continue at Lake Elmo Airport to complete the relocation and extension of Runway 14-32, which will be paved later this year. The new runway will span 3,500 feet and will allow the existing runway to be converted to a taxiway. New lighting, signage and other airfield safety improvements are also planned.

The MAC’s reliever airport system generates an estimated $756 million a year for the area economy and supports more than 3,600 jobs (www.metroairports.org).