Wally Funk Named the Recipient of the 2021 Stinson Trophy 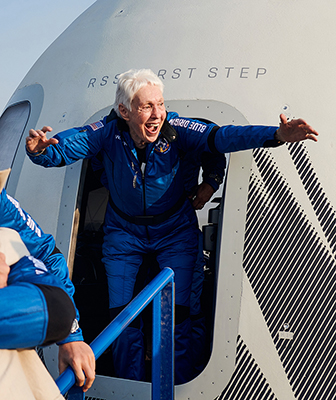 WASHINGTON, DC (February 17, 2022) – The National Aeronautic Association (NAA) has announced that Wally Funk has been selected as the recipient of the 2021 “Katherine and Marjorie Stinson Trophy.”

The Stinson Trophy was created in 1997 by NAA to honor the accomplishments of two sisters – Katherine and Marjorie Stinson. These sisters were among the first 11 American women to be certified as pilots through the Aero Club of America (the predecessor of NAA). Their flying school helped numerous U.S. and foreign pilots to earn their Aero Club licenses, the precursor to FAA pilot certificates. The trophy recognizes a living person for “…an outstanding and enduring contribution to the role of women in the field of aviation, aeronautics, space, or related sciences.”

Funk is being recognized for “… blazing trails for women in aviation and spaceflight and inspiring the next generation of aerospace professionals as a pioneering member of Mercury 13, and as a flight instructor, air safety investigator, and the oldest woman to fly in space.”

Funk took her first flight lesson at the age of 9. When she was 16, she began flight school at Stephens College in Columbia, Missouri, while studying for an Associate of Arts Degree. Funk flew with the school’s “Flying Susies” student aviation club and ranked the top flyer in her class. She then continued her studies and flying at Oklahoma State University (OSU) where she was a member of the “Flying Aggies.” Her competition performance earned top awards from OSU, and she graduated with a Bachelor of Arts Degree in Education and numerous certificates and ratings. After graduation, Funk worked as a flight instructor at Fort Sill military base in Oklahoma.

Funk set her sights on space in 1959 after learning about the Lovelace Woman In Space Program, a research project by the doctor who evaluated NASA’s Mercury astronauts. Funk volunteered for Lovelace’s invasive and challenging panel of 87 experiments testing women’s fitness for spaceflight. At 20 years old, she was the youngest participant and one of the top performing candidates. Funk was one of the 13 women who completed the program and one of just three who underwent psychological testing in Oklahoma City. This group of volunteers came to identify as the “Fellow Lady Astronaut Trainees” and the “Mercury 13.” Ultimately, Lovelace’s unsanctioned program ended because the United States chose not to train women while competing against the Soviet Union to be the first country to land on the Moon. It would be years until NASA seriously considered women’s capacity to contribute to space exploration, but Funk’s superior performance in the Lovelace program paved the way for women to access astronaut careers.

Funk went on to dedicate decades of her life to flight safety and instruction. As a flight instructor, she soloed more than 700 students in numerous aircraft. Funk was the first woman to serve as an air safety investigator with the National Transportation Safety Board and a specialist in the Systems Worthiness Analysis Program at the Federal Aviation Administration.

Building on her passion for education and experience as an air safety investigator, Funk developed her own aviation safety course, which she enthusiastically delivered to professionals across the country. She also invented the “Wally Stick,” a device for detecting damage to aircraft propellers.

In July 2021, Funk finally achieved her long-deferred dream of spaceflight as a member of the first crewed suborbital mission of Blue Origin’s New Shepard capsule. She made history as the only “Fellow Lady Astronaut Trainee” to fly in space. At the time, she was also the oldest person in space (William Shatner, age 90, broke that record in October 2021). She remains the oldest woman ever to fly in space. Through this mission, Funk came to be known – and beloved – by new generations as a vanguard of an exciting new chapter of space exploration and tourism in space.

“Funk has made an indelible impression on the history of aviation and spaceflight through a lifetime of hard work, skill, and can-do spirit,” expressed Emily Margolis, curator at the Smithsonian’s National Air and Space Museum, who nominated Funk for this award. “Her work as a flight instructor and air safety investigator and instructor has improved aviation for all. As an astronaut testing volunteer in the 1960s, Funk laid the foundation for women to travel in space, a dream she finally realized in 2021. Funk is certainly a trailblazer worth celebrating.”

“It will be an honor to present the Katherine and Marjorie Stinson Trophy to Wally Funk,” said NAA President Greg Principato. When I was a kid in the 1960s, I asked my mom if women could be astronauts. She assured me they could and would. What neither she nor I knew at the time was that Wally had already done all that was required, and more. Wally blazed a trail that has inspired women and girls (and an awful lot of men) for many years since. When you see her at conferences, she is surrounded by young women and girls who she has inspired. For her tireless efforts over more than six decades, Wally is most deserving of this award.”

The Stinson Trophy was presented on March 17, 2022, at the 33rd Annual International Women in Aviation Conference in Nashville, Tennessee.

The National Aeronautic Association is a non-profit membership organization devoted to fostering opportunities to participate fully in aviation activities and to promoting public understanding of the importance of aviation and space flight to the United States. NAA is the caretaker of some of the most important aviation awards in the world and certifies all national aviation records set in the United States (www.naa.aero).