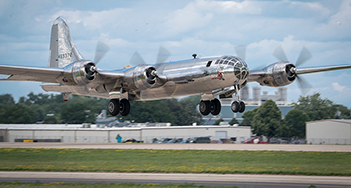 The B-29 “Doc” on takeoff at EAA AirVenture Oshkosh 2019.
EAA Photo by Michael Kutz.

EAA AVIATION CENTER, OSHKOSH, WIS. – “Doc,” one of only two airworthy Boeing B-29s in the world, will be returning to EAA AirVenture Oshkosh, July 25-31, at Wittman Regional Airport in Oshkosh, Wisconsin, to help celebrate the 75th anniversary of the U.S. Air Force. This will be the 69th edition of the Experimental Aircraft Association fly-in convention.

AirVenture will feature aircraft from throughout the history of the Air Force, from its beginning with the Army Air Forces in 1947, to today’s modern military aircraft.

“The rarity and the historical significance of the B-29 always make it a popular sight at Oshkosh,” said Rick Larsen, EAA’s vice president of communities and member programs, who coordinates AirVenture features and attractions. “Being able to see Doc both on the ground and in the air during AirVenture week will be a big addition to our commemoration of the U.S. Air Force’s 75th anniversary this summer.”

Doc was rescued from the Mojave Desert in 1987 and was meticulously restored over a 30-year period. It made its first air show appearances in 2017, including a legendary flight at Oshkosh that year with the Commemorative Air Force’s B-29 “FIFI,” marking the first time two B-29s had flown together in formation in approximately 60 years.