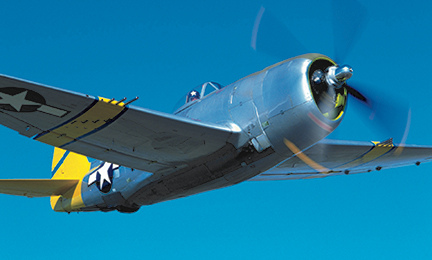 Weighing 10,000 pounds empty, the Thunderbolt was the largest single fighter built during War. The aircraft was effective as a short-to-medium range escort fighter in high-altitude air-to-air combat and ground attack in both the European and Pacific theaters. A total of 15,636 Thunderbolts were built by Republic Aviation between 1941-1945, but only four remain flying today. The aircraft coming to Airbase Georgia did not see fighting during the war, but it was used effectively in Nicaragua and Guatemala in the 1950s. It was the last of its type to record an aerial victory, during a dispute between Nicaragua and Costa Rica in 1955.

The CAF acquired the aircraft and brought it to the United States as part of its early fleet building prior to 1970. It was heavily damaged when it caught fire during takeoff about 10 years ago, severely burning part of the fuselage and the right wing. The P-47 had been undergoing preliminary renovation at the CAF SoCal Wing in California. The rebuilt sections and parts will be shipped to Airbase Georgia to complete the restoration over the coming few years. When renovation is completed, the CAF expects the aircraft to be in demand for airshows around the country.

CAF Airbase Georgia, based in Peachtree City, Ga., was founded in 1987. The airbase is one of the largest units of the Commemorative Air Force (CAF). The group maintains and flies seven vintage military aircraft including a P-51 Mustang, an FG-1D Corsair, an SBD Dauntless, and a P-63A Kingcobra.

The airbase, which is composed of more than 400 volunteers, has hosted WWII Heritage Days since 2003. The organization is also a founding partner of the Georgia WWII Heritage Trail, launched in 2021. The airbase is part of the CAF, a non-profit, tax-exempt organization that relies on contributions of time and funds to carry out its mission (https://airbasegeorgia.org/).