When full-depth pavement “reconstruction” isn’t financially feasible, and a mill and overlay will only provide a short-term solution, airports often find themselves in a bind.

To minimize disruption of airport operations and keep cost down, Bolton & Menk, an engineering firm with offices in Mankato, Minnesota, and elsewhere in Minnesota, North Dakota, Iowa, North Carolina, and South Carolina, applies the full depth “reclamation” (FDR) process to reconstruct the pavement at airports. FDR is the process of pulverizing the existing thickness of asphalt surfaces and blending it with the underlying aggregate base layer to form a reclaimed asphalt base layer. This layer is then shaped, graded, and compacted with a new asphalt surface paved over it. Bolton & Menk uses the FDR process to recycle existing materials to provide a high-quality product at substantially lower cost than complete reconstruction methods.

Step 1: Evaluate the Pavement
• Evaluate the existing asphalt and aggregate based thickness to determine if
FDR is the best approach.
Step 2: Reclaim the Existing Pavement
• Pulverize the existing asphalt layer and blend it with the underlying
aggregate base layer to create a reclaimed asphalt base layer.
Step 3: Grade, Shape, and Compact The Reclaimed Base Layer
Step 4: Pave New Asphalt Surface Over Reclaimed Base 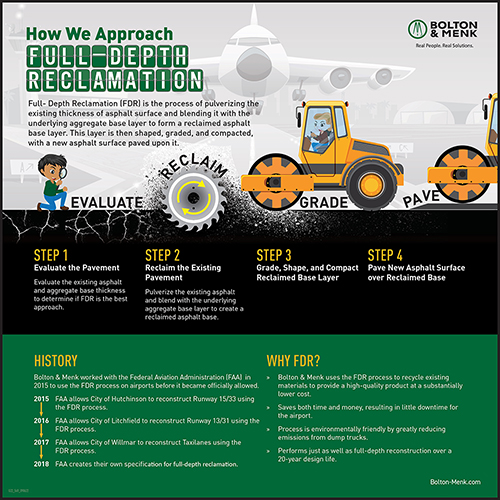 The History of the FDR Process