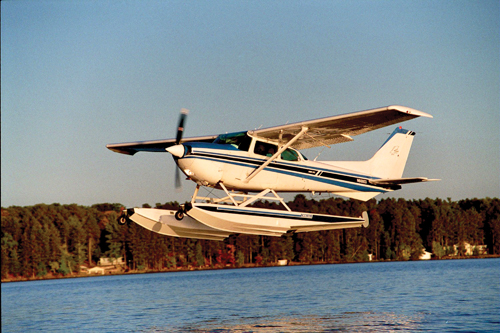 Of all the flight training one can do over a pilot’s lifetime, one of the most fun challenges is probably getting your “seaplane rating.” Personally, I did mine on a “dare” with a buddy of mine many years ago…he challenged me to see if we could both get it done. We both completed our training in a well-used J-3 Cub on floats, and have many fond memories of that. Fortunately, I moved ahead and eventually bought a seaplane and have loved every minute of it. As an instructor, it’s one of those things you never get tired of.

Seaplane training comes in two flavors. First, is the quick and easy; do it in a day “trophy” rating, where you learn just enough to pass a checkride with an on-staff examiner, but never really learn much that you’ll retain. The other is to find a school where you really learn the material, and walk away with things you’ll never forget. While the first method is legal, and for some, serves its purpose, we’ve chosen the second route…and think our students appreciate it.

Lakeshore Aviation is the only full-time seaplane flight school in Wisconsin…at least as full-time as you can be in this part of the country. We teach in a 1979 Cessna 172XP, a variant of the venerable 172 line that was only manufactured for three years. Instead of the normal 150 or 160 hp Lycoming, this plane boasted a six-cylinder Continental, putting out 210 hp, but derated to 195 hp for marketing purposes. There’s an STC to boost it back up to 210, which really helps in seaplane takeoffs. Add a constant-speed prop and Wipline amphibious floats, and you’ve got a pretty good go-anywhere, wet-or-dry airplane.

In a recent experience with a young chap from South Africa, we learned that there are no seaplanes in the entire country! After his experience, he and his dad were so impressed, they are working on a deal to bring a Cessna 206 on amphibs over to teach all their friends. Hopefully, we’re part of that training program; what an experience that would be!

Then there was the weekend a bunch of guys got together in northern Wisconsin, and we taught eight pilots in one weekend. In total, there were three planes, four instructors and two examiners. That was a lot of work, flying non-stop, but what fun. We even had a visit from the local law enforcement boys, as there was a town ordinance against for-hire sightseeing rides of any type. We eventually convinced them that it was FAA authorized training, and we completed our task. Everyone passed with flying colors.

One of our favorite students has become a regular visitor, and now makes Wisconsin a part of the family’s annual vacation. He’s a German aviation engineer, responsible for creating VIP interior seating for luxury jumbo jets. It has been interesting learning about aviation in Europe, and sharing photos of his homeland. He has also become a great pilot, and rents planes on his visits to the U.S.

Did you know that one of the leading manufacturers of custom aircraft interior seating is in Peshtigo, Wisconsin? Neither did I.

Some of the most challenging students, oddly enough, are the most experienced ones. Jet drivers just don’t have a comfort level flying at 500 feet doing 70 mph. Add in flying over the water at 25 feet, dodging bald eagles and taxiing up to an island instead of a jetway, and you’ve got a little familiarization to overcome. Just about every session, though, ends with a huge smile at the end of the day, and digital pictures to email back home to show everyone.

You might be wondering about the title of this article: Gear Down On Final….Or Not? For those of us who have moved up into more complex airplanes (those with fold-up wheels) are undoubtedly familiar with the GUMPS checklist, and double, triple checking to make sure your gear is down before landing. Doing otherwise not only leads to a bruised ego, but the unpleasant sound of screeching metal sliding down the runway, or worse. So it’s gear down, gear down, gear down, over and over again.

But not so on the water with amphib floats. Half the time, gear UP on final is the correct choice. Landing gear down in the water leads to an immediate capsizing, an emergency evacuation and a visit with your friendly FAA inspector. Hopefully nothing worse, but many have lost their lives trying to get out before the water gets in.

Wipline and other float manufacturers have now added an audible gear advisory warning system to their floats, activated by airspeed. It rather “urgently” advises you in your headsets if you’re configured for “gear up for water landing” or “gear down for landing on land.” A bright set of blue (water) lights or green (land) indicator lights add to the notification. If you work the system right, you’ll never have an accident….but get lazy, and watch out. Like they say, “there are those who have forgotten, and those who will.” With the versatility comes the risk, so it’s important to stay on top of things and don’t forget the checklist.

With seaplane season upon us, give it a thought. Many a pilot have put the seaplane rating on their bucket list, so why not join them. Do like I did, and challenge a buddy to come along. Make it an experience you can share. It’s something you’ll never forget!