Getting Checked Out To Rent A Seaplane 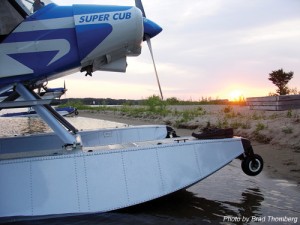 Most of my time flying seaplanes has been spent at latitudes north of Lake Superior. Sure there has been the occasional flight to Oshkosh or a trip on amphibs to the big city. But before this day I had not departed a metro lake on floats. Northeast bound, away from the rat race, I could not picture the Class Bravo airspace above me. It was there – the sectional chart depicted it – I just had trouble imagining such restrictions in the seaplane environment. It wasn’t until turning back toward the metropolis that I could once again visualize the upside-down wedding cake that is the big daddy of all airspace.

Climbing too high and busting the Class Bravo was not a problem for us today. First, we were in a small Cessna with a lot of aluminum weight and drag below us. Second, the purpose of our flight was to get me checked out for solo-rental. That’s right, I said solo-rental in a seaplane, believe it or not, some intrepid companies still do it. Don’t tell your attorney friends.

In the seaplane world, getting a checkout has very little to do with one’s ability to maneuver at high altitude. No, your real skills are on display below about 1,000 feet. Short of demonstrating to the instructor your aircraft-sinking technique, or your ability to puncture a float on the dock, some would say that you are judged by one thing: did you remember to retract your water rudders? Normally, the water rudders are to be retracted for takeoff and landing to avoid damaging the floats as they skip along the water at high speed. Failure to retract these fragile steering devices brings with it humiliation equal to slipping and falling off of your float while docking. Some would say worse. Regrettably, some seaplane pilots are notorious for not using their checklists, this flaw is almost understandable.

On approach to docking.

On the step with water rudders retracted.

Leaving the dock is a difficult time to exercise good checklist discipline. Sure, the preflight checklist and the before-starting-engine checklist can be accomplished while still lashed to the dock. It is once the dock lines are untied that Mother Nature begins to giggle. Gusts of wind, a little current, maybe even some waves are her way of charging you admission to the aquatic world.

These challenges make it imperative that you get in and successfully start the engine so that you avoid banging into boats, shoreline, the dock, or other planes. Make no mistake about it; this is a situation, which can bring both personal embarrassment and higher insurance premiums. Therefore, this is not a good time to be drifting aimlessly while reading the step-by-step procedure that Walter and Clyde developed for starting your Beechcraft or Cessna. Instead, you must have this process memorized and rehearsed if you are going to be routinely successful.

That includes all of the different starting techniques for your aircraft: cold starts, hot starts, flooded starts, and failed starts. You won’t find a “failed” start checklist in many manuals, but unlike a landplane pilot, you don’t have a parking brake to rely on if the engine doesn’t start. In other words, you had better have a plan for dealing with those rocks that are downwind of the dock.

Once you are underway with the health of the engine not in doubt, this is a good time to visually clear the area again, put on your safety restraints, close the doors, don your headset, and grab the checklist. There is no reason to be in a hurry at this point.

Going back to the water rudder issue, there is at least one occasion when a seaplane pilot may elect to leave their water rudders down for takeoff. You may find situations where directional control cannot be maintained at the beginning of the takeoff run due to a combination of strong winds and a lack of control effectiveness at low speeds. In this case, you may choose to leave the water rudders extended for the beginning of the takeoff. Some pilots

choose to enlist the help of a trust-worthy passenger to retract the water rudders, at the pilot’s command, once they have accelerated onto the step.

Be careful if you do choose to involve someone without experience. You should thoroughly brief your new “crewmember” on exactly what you want them to do and what not to do (like not getting in the way of the yoke or inadvertently pushing on the rudder pedals), then have them practice it and repeat the instructions back to you to verify that they understand exactly what you expect.

If you are alone in this situation, it is probably best to just leave the water rudders down for the entire takeoff, rather than risk losing control. It should be noted that most water rudder retraction devices are located on the floor. Thus, putting your head down near your knee and retracting the water rudders during a critical phase of flight is an advanced technique that should only be attempted by those who enjoy the possibility of loud noises and unintentional submersion.

After landing you get to practice many of your on-water skills again. Most of this procedure is just a matter of doing things in roughly the reverse order from when you taxied out: shutting down non-essential systems, completing your after-landing checklist, removing your headsets, undoing the seatbelts, and opening the door. Many of these actions are meant to allow you easy egress. Do yourself a favor and move the headset cords up and out of the way so they don’t get tangled in your feet as you slide your seat back and exit. From here to the dock it is all about managing momentum – and that is more about feel than procedure.

If you haven’t tried water flying yet, I encourage you to do so. It is a challenging and fun environment in which to operate. It also makes you more self-reliant and takes you to places that many people only dream of visiting.