OSCEOLA, WIS. – L.O. Simenstad Municipal Airport (OEO) was positively buzzing February 19, 2011, with extra activity. A group of 55 skydivers and many more spectators descended on the airport, thanks to the friendly and generous support of the airport commission. This unique event was called the “Alpha Boogie.” 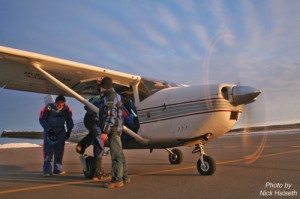 Jumpers board Skydive Superior’s Cessna 182 for another skydive.

Skydiving is not new to the Osceola area. The St. Croix Valley Skydiving Club existed for many years on a private strip just south of L.O. Simenstad Municipal Airport. The skydivers would frequently use the airport on muddy days, when the grass strip wasn’t suitable for safe takeoffs and landings. A tragic mid-air aircraft accident in 1991 took the lives of five of the club members, along with the lives of a flight instructor and his student. The club struggled after the accident, and ultimately closed its doors by 1993. 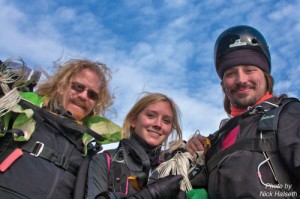 The club wanted to hold the memorial Alpha Boogie in honor of Pat Quaschnick, Jon Quist, Curt Hostager, and Gary and Kristi Hoffman, their friends who were lost in the crash. Club member Peter Mootz approached the airport commission with his ideas. Initially, the commission expressed some concerns about traffic, but they were quickly excited about the special event. Commission member Phil Mattison generously stepped up to offer free use of his hangar. Mootz teamed up with Merriah Eakins, a former drop zone brat with the club, and two-time National Skydiving Champion, to complete plans for the boogie.

Mootz secured aircraft from several area drop zones. Skydive Wissota, Wisconsin, and Westside Skydivers, Minnesota, each brought a Cessna 182. Skydive Superior, Wisconsin brought a Cessna 182 and a Cessna 185. Meanwhile, Mootz monitored the list of jumpers planning to attend. Eakins created waivers and load slips for the event, while assembling all of the extra items needed to run a drop zone and a celebration. After months of preparation, the boogie was well planned…now the organizers just had to pray for good weather. 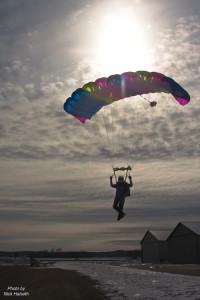 That February Saturday dawned with perfect conditions. Clear below 12,000 feet and light winds promised a huge turnout. Mary Bauer of Skydive Wissota held a pilot briefing, addressing radio procedures and frequencies, spacing of aircraft for the jump run, skydiver communication, and flight route plans for each jump plane. The pilots announced the jumpers on three separate frequencies: local, pilot-to-pilot, and Minneapolis Center, ensuring that everyone in the area was aware of the jump run timing. Thanks to Bauer’s thousands of hours of flight time, and extensive knowledge of running a multi-aircraft drop zone, the pilots handled themselves beautifully.

Hayden Androsky, of Skydive Superior, assisted the pilots by acting as air boss, and keeping an eye on the sky at all times. When the organizers thanked Androsky for his help, he commented, “I love this stuff! The more airplanes, the better!”

By the end of the day, the four aircraft had flown a total of 39 loads, with no conflict to the local general aviation population. The event was a huge success, and the skydivers were all very grateful for the incredible day. The organizers are already considering a similar event in the future. There is a good reason that the Osceola airport is called “Western Wisconsin’s Friendliest Airport”!