The Wisconsin Bureau of Aeronautics participates in the International Aviation Art Contest, which is intended to motivate and encourage young artists to participate in and become more familiar with aviation, science and engineering.  The contest is sponsored in part by the National Association of State Aviation Officials (NASAO). The theme this year was, “50 Years of Human Space Flight.”

Students between six and 17 years old were invited to submit their artwork that captures the excitement, activities and possibilities in the world of aviation. This year the Wisconsin Bureau of Aeronautics received over 65 pieces of artwork for the 2011 International Aviation Art Contest.  Entries were judged in three age brackets; 6-9, 10-13 and 14-17 years old.

Entries in each age group were judged by the Wisconsin Bureau of Aeronautics staff on January 19, 2011, and state winners and runners-up were selected. Winners received a certificate and recognition from the State. The top three entries in each age group were forwarded to Washington D.C., where they were judged in the national competition. In Wisconsin, entrants earning first place in each category received their choice of an airplane flight for themselves and a guest or $100 in art supplies. Second place winners received $75 in art supplies and third place winners received $50 in art supplies. The top three pieces of art will be displayed at Wisconsin’s State Capitol from June 13th to June 24th of this year. 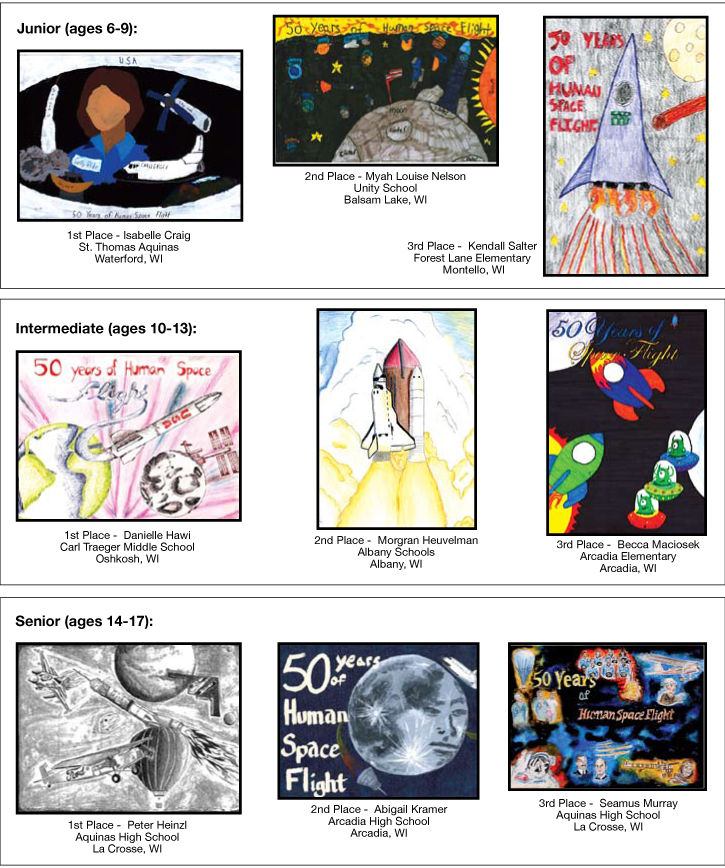 At the national competition, first, second and third place winners were selected from each age group. All national winners received certificates, ribbons and a framed reproduction of their artwork. The United States national judging took place the week of February 7, 2011. Several Wisconsin entries have placed in the top three nationally over the years of participation. This year, the national winners came from Minnesota, New Mexico, New Jersey, California, Nebraska and Texas.

The first, second and third place national winners in each age group will be forwarded to Fédération Aéronautique Internationale (FAI) headquarters for international judging. Winners of the international competition will receive certificates and gold, silver or bronze medals.

For more information about the art contest, contact Nicole Wiessinger at 608-266-8166 or email nicole.wiessinger@dot.wi.gov.