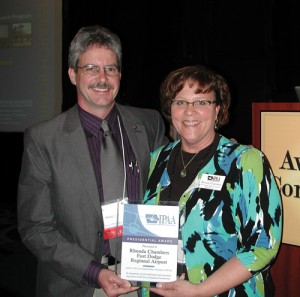 The FAA Central Region Airports Division met with several airports at the conference to discuss projects. They also provided an update on the reauthorization of the agency, and the impact of continuing resolutions.

The Iowa DOT Office of Aviation released its updated aviation system plan for the state. The Iowa Aviation System Plan evaluates existing conditions of Iowa’s air transportation system and makes recommendations for future development to meet the needs of users. It also serves as a guide for federal, state and local decision-makers for investment in the maintenance and development of airports (www.iowadot.gov/aviation).

New policy guidance from the FAA requires the use of Airport Geographical Information Systems (AGIS) and electronic formatting of Airport Layout Plans (ALPs) for airport projects. A panel presentation with Foth Consultants, FAA, and the Dubuque Regional Airport provided insight into new FAA requirements and the benefits of using GIS technology.

A pilot safety meeting held in conjunction with the conference covered a review of recent Iowa aircraft accidents, the lost art of the go-around, safety briefings for passengers, and the 10 simple safety tips for pilots.

Federal Security Director Jay Brainard provided an insightful presentation on threats to the aviation system posed by terrorists. He also addressed the need for airport operators and the aviation community to continue practicing vigilance when it comes to aviation and airport security.

Iowa City Planning & Community Development Director Jeff Davidson highlighted the development of a five-year strategic plan for the Iowa City Municipal Airport. The plan was created locally to guide the direction of the airport and develop a solid foundation for delivering aviation services to the community. The plan is an example of a proactive approach in getting decision-makers and community members involved in planning for an airport.

A presentation on skydiving in Iowa was provided by professional skydiver, Steve Lawyer, who is also a lawyer and pilot. He discussed drop zones in Iowa, what it takes to skydive, and how skydiving can be a part of increasing activity at an airport.