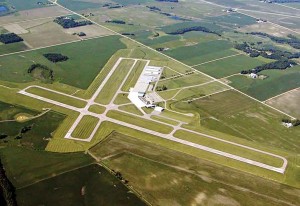 For many years, the Federal Aviation Administration and the Mn/DOT Office of Aeronautics have partnered with public airports in Minnesota. One result of this partnership is the annual FAA/Governor’s Award, which is presented cooperatively by the Federal Aviation Administration and the Minnesota Governor’s Office at the Minnesota Airports Conference, since 1988. The award recognizes excellence in airport planning, development, operation, maintenance, and public relations.

Minnesota Aeronautics Director Chris Roy presented the 2011 FAA/Governor’s Award to Mankato Regional Airport-Sohler Field for its dedicated support of aviation and its successful and innovative project accomplishments. The award was presented at the Minnesota Airports Conference in Grand Rapids.

Accepting the award on behalf of Mankato Regional Airport was airport manager, Kevin Baker, and the manager of the Capital Improvement Project, Luther Krepsteckies.

Mankato Regional Airport-Sohler Field is named after Lawrence Sohler, who was an advocate for aviation in southern Minnesota. The earliest depiction of the airport is in the 1929 Rand McNally Atlas. The field was described as a commercial field operated by the Chamber of Commerce measuring 2640 by 1750 feet and located 1.5 miles southeast of Mankato. L.J. Sohler was the first manager of the field and proprietor of Sohler Flying Service, which provided instruction, aircraft sales, passenger flights and air taxi/charter service.

Mankato Regional Airport was moved to its current location 3 miles northeast of the city in 1969. The airport encompasses over 840 acres, has two runways, and an ILS system. The primary runway is 6600 by 100 feet and the crosswind runway is 4000 by 75 feet. Seventy-seven registered aircraft are housed at the airport, including those used for the Minnesota State University Mankato (MSUM) aviation program, and one Mayo Clinic helicopter used for emergency transport. The fixed-base operator is North Star Aviation. The field has been the site of several air shows, which have hosted the Blue Angels, Thunderbirds and Snowbirds. Another air show featuring the Blue Angels is scheduled for June 2012.

In the last 20 years, the City of Mankato has invested a significant amount of effort into improving the viability of the airport. In 1991, the city erected a new Crash Fire Rescue building. The city still maintains Part 139 requirements, even though air carrier service was lost in the ‘90s. In 1994, a 10,200 square foot hangar was constructed to support the MSUM aviation program. The program was slated to be cut in 2010 by MSUM, but has been given an extension due to civic engagement and private financial support.

The airport has seen a flurry of improvements since 1997. Four T-hangars were constructed; there is now T-hangar space available for 72 aircraft. In 1997, the city completed a 15,300 square foot terminal. The terminal currently houses the fixed-based operator and the MSUM aviation program with two simulators on site. A commercial hangar area with a service road and connecting taxiway were also constructed in 1997. In 1999, the city partnered with North Star Aviation to construct a 14,000 square foot hangar in the commercial development area to support fixed base operations.

In 2007, Mankato completed the extension of its primary runway extending it from 5,400 to 6,600 feet. The decade-long project included planning, environmental assessment, land acquisition, design and multi-year construction. The 12-inch thick concrete pavement positions the airport for potential future development and will handle aircraft as large as a Boeing 757. The crosswind runway (Runway 4/22) was milled and overlaid in 2009 using American Recovery and Reinvestment Act funds. The project had some unique issues because of asbestos in the pavement. A geotextile fabric was placed in the concrete after milling to improve pavement longevity. Additionally, the VASIs were replaced with PAPIs, and the REILs were replaced on Runways 4/22 and Runway 15.

In the past two years the City of Mankato has added a state-of- the-art-security system, self-service to the 100 low-lead fuel system, crack-sealed the parallel taxiways, painted several buildings, and made significant repairs to a T-hangar roof. This year the city is partnering with Mayo Clinic to construct a new hangar that will house two helicopters and emergency crews. The parallel taxiway and parking lots will be slurry sealed, the public parking area will be expanded, pavement improvements will be made to the T-hangar area, and the city is negotiating for the construction of another 12,000 square foot hangar and temporary classrooms to support an international fixed and rotary-wing training program that will begin this fall.