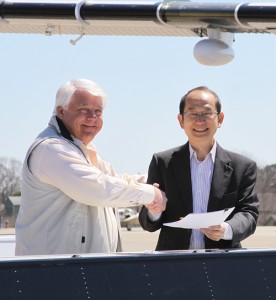 SOUTH ST. PAUL, MINN. – Wipaire, Inc., the United States distributor of aircraft floats, has appointed Aviation Supplies Ltd. as its first distributor in China. Wipaire is encouraged by the prospect of additional sales generated by the expanding global market for general aviation aircraft and aircraft floats in China.

Wipaire sold four sets of floats to China in 2002. In 2005, the Minnesota Trades Office sponsored the “Mission to China” trip for Minnesota businesses looking to expand in that country. Chuck Wiplinger, now president of Wipaire, went on that trip, and has continued to foster relationships since then. In 2007, Wipaire hired its first international sales representative. In November 2010, low-altitude airspace over China was opened up to general aviation, providing the first great outlook for exports to that region.

“We are very pleased to have Aviation Supplies represent Wipline Floats throughout China,” stated Bob Wiplinger, CEO. “Aviation Supplies has a proven record of success as a leading general aviation aircraft sales and services organization in China and should lead us to a successful entry into that market.”

Chuck Wiplinger said that China is a “very young market, and has huge potential.” Sixty percent of Wipaire’s business is international.

Wiplinger feels that China is out to dominate the aviation world, but does not fear that the Chinese might try to copy Wipaire’s float design. Aircraft floats are such a niche market that he feels that the Chinese are better off working with a proven leader in the industry, rather than compete in such a limited market.

Chuck Wiplinger says that China is lacking airports and needs to develop regulations, which will allow general aviation to prosper. The best regions for floatplanes in China are in the northeast and southwest where there are plenty of lakes and rivers. 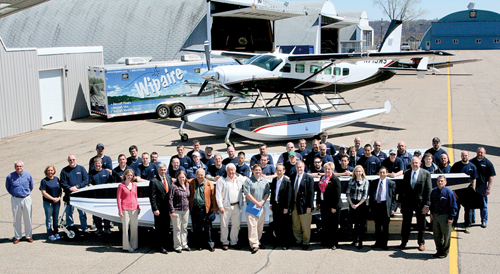 Wipaire’s manufacturing team and representatives of the local community attended the signing ceremony for the official agreement with Aviation Supplies, Ltd. The agreement comes just six months after the Chinese government opened their low-altitude airspace to general aviation.

Wipaire currently employs more than 150 people, and for over 50 years, has been manufacturing aircraft floats for all sizes of aircraft, from the Piper Cub to the de Havilland Twin Otter and most Cessna models including the Cessna Caravan. The company is located at Fleming Field in South Saint Paul, Minnesota, and has a production facility on the Mississippi River in nearby Inver Grove Heights, Minnesota.

Wipaire has over 100 Supplemental Type Certificates for a variety of useful aircraft modifications. In addition, Wipaire is a service leader in other areas, including aircraft maintenance, avionics installation and repair, custom interior design and installation, and exterior refinishing.

This agreement with Aviation Supplies Ltd. to expand sales in China comes at a pivotal time in the history of Fleming Field, which is owned and operated by the City of South St. Paul. In recent months, the city has proposed replacing the full-time airport manager with a part-time employee, which could impact services and future airport development. Wipaire, Inc. and all tenants at the airport have strongly opposed the proposal and offered to subsidize the position for at least one year. Wipaire has also indicated that its future expansion at the airport may be affected by the city’s decision.

Founded in 1981, Aviation Supplies Ltd. has been the Authorized Sales Representative for Cessna Aircraft Company for over 15 years for single-engine piston aircraft, Caravans, and Citation aircraft. The company is also the authorized parts distributor for piston and turbine aircraft. The company currently has facilities in Shanghai, Beijing and Hong Kong.